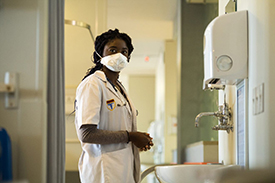 A 1950s era experiment at the Baltimore VA Medical Center is part of the reason many physicians and others recommend people wear masks to keep from being infected by dangerous airborne pathogens, such as the virus (SARS-CoV-2) that causes COVID-19.

In 1954, Dr. John Barnwell, then VA’s director of research and education, provided three Johns Hopkins University researchers access to a semi-isolated suite of rooms at the Baltimore hospital housing Veterans with tuberculosis (TB). TB is an infectious disease characterized by the growth of nodules, or tubercles, in the tissues, especially the lungs. The researchers also received access to a small penthouse located directly above those rooms.

The team placed 150 guinea pigs that did not have TB in the penthouse area. The animals breathed air vented from the ward below for two years. An average of three guinea pigs a month caught the disease. No guinea pigs in a control group that breathed disinfected air became ill. The team concluded there was no other way the guinea pigs could have caught TB other than through airborne droplets the size of a mote of dust, thereby proving the disease could be transmitted through the air.

Airborne particles this size are released in tiny microdroplets when you exhale, talk, and cough—and masks protect you from inhaling the droplets and also protect others from inhaling any you produce. This study led directly to the recommendation that wearing masks and regularly disinfecting air in enclosed spaces are effective tools for fighting COVID-19.