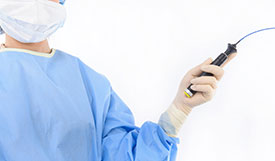 Cardiac ablation involves threading a long, flexible tube through a vein or artery all the way to the heart. (Photo: ©iStock/NunoMonteiro)

VA research with dog models in the 1990s and 2000s was crucial in the development of cardiac ablation as a way to treat cardiac arrhythmia. Cardiac arrhythmia is a heart condition in which the heart beats too fast, too slow, or irregularly. Untreated arrhythmias may have serious consequences, such as heart attack and stroke.

Cardiac ablation involves threading a long, flexible tube through a vein or artery all the way to the heart. Energy, in the form of heat (radiofrequency ablation, similar to microwave heat) or extreme cold (cryoablation), is used to scar or destroy abnormal heart tissue, which cures the arrhythmia. The VA research contributed to the evolution of the instruments used and the optimization of the intensity and duration of the ablation energy applied. This has become a routine procedure for the clinical treatment of cardiac arrhythmias.