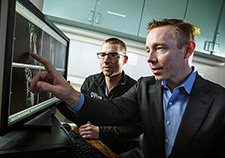 Dr. Harvey Smith (right) is an orthopedic surgeon and researcher with VA and the University of Pennsylvania. (Photo by Tommy Leonardi)

Dr. Harvey Smith (right) is an orthopedic surgeon and researcher with VA and the University of Pennsylvania. (Photo by Tommy Leonardi)


A Humvee carrying U.S. soldiers is hit with a roadside bomb in Iraq. A soldier who survives the explosion suffers a serious neck injury that herniates one of his intervertebral discs, which hold vertebrae together in the spine. He feels pressure on his spinal cord and a progressive loss of function with his muscle reflexes. In what may only be a temporary solution, the soldier undergoes cervical spinal fusion, meaning pressure is reduced on the nerves and his neck is stabilized.

Without that procedure, the soldier would likely go on to suffer progressive neurological dysfunction. He would already be battling degenerative disc disease, with symptoms of pain, weakness, and a lack of coordination stemming from a faulty intervertebral disc. It's a huge public health problem that affects many Veterans. In fact, back and joint pain and other musculoskeletal ailments are the most common diagnoses among Vets who fought in Iraq and Afghanistan.

"We're creating an organ out of the body from scratch, making it, growing it, and transplanting it."

There are no proven ways to treat degenerative changes of the intervertebral disc and its debilitating long-term effects, except for surgery.

Enter Dr. Harvey Smith, an orthopedic surgeon at the Corporal Michael J. Crescenz VA Medical Center in Philadelphia. He's leading a study to develop a biologic intervertebral disc he hopes will someday resemble one in a healthy young adult. The disc, a product of living animal tissue, will consist of a newly made annulus fibrosus, the disc's thick circular exterior, and nucleus pulposus, the disc's soft gel-like inner core. With the disc in place, people will be able to resume a normal life with regard to everyday activities and even sports, he says.

A microscope image of a disc made in Dr. Harvey Smith's lab. (Courtesy of Smith lab)

A microscope image of a disc made in Dr. Harvey Smith's lab. (Courtesy of Smith lab)


"Long-term treatment usually winds up being a spine fusion, which despite fixing the nerve issues can lead to other surgeries down the road," says Smith, who also has a faculty appointment at the University of Pennsylvania Perelman School of Medicine. "So there's a real need and desire to find a way to intervene earlier in the degenerative process, to try to slow it down and reverse it in hopes we can change the course of the disease so it doesn't lead to end-stage degeneration necessitating a spine surgery."

The project is now in lab stages. Under a five-year VA Career Development Award, Smith and his colleagues have created a biologic disc for rats, rabbits, and goats that had their natural discs removed. He says the preliminary results are "very, very encouraging." 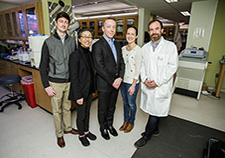 
"The disc performed better than we expected," Smith says. "The animals are walking around, eating hay in their cages, and exhibiting normal behavior after the surgery. They appear to have normal function."

Two goats were tested in a preliminary trial. Data from that research qualified Smith and his key collaborator, VA researcher Dr. Robert Mauck, for a VA merit award that covers the testing of 72 goats over a four-year period.

The expanded goat study will be a "huge leap forward" from the rat and rabbit research, he says. A goat's cervical spine is similar in size and geometry to the human cervical spine. That testing will take two to four years, and, if successful, a non-human primate or human safety trial will be the focus of the next round of research, he notes.

"The earliest we would see the human trials would maybe be five years at best," he says. "And even once we start early human trials, we have to be very cautious and careful that what we're doing is going to work and be safe. So it would be much longer than that before it gets close to clinical use as a routine therapy if it works. It is important to follow appropriate FDA [Food and Drug Administration] protocols to demonstrate safety and efficacy before we could really ascertain how long it would take to have a clinical treatment."

Smith says his team's efforts to make an intervertebral disc out of living tissue are unique.

"Other groups have been working along similar research lines," he says. "We have benefited from their results and published data to determine our research strategy. We're basically making a disc. We're creating an organ out of the body from scratch, making it, growing it, and transplanting it. It's working."

To create the disc, Smith and his team must design a structure that will both function like the gel-like shock absorber of the real disc and that can withstand motion. The structure also must be able to live and nurture cells so it can last for many years.

The researchers re-create the shock absorber with a hydrogel composed of the natural substance hyaluronic acid, which is used to treat skin. The hydrogel, which is seeded with stem cells, replicates the disc's inner core. "It's like the jelly in a jelly donut," Smith says. The exterior of the disc, which is filled with circular layers of PCL (electrospun polycaprolactone) fibers, is also seeded with stem cells. PCL, a synthetic polymer, is widely used in tissue engineering.

The gel is placed in the cylinder of the disc's exterior, and both components are grown outside the body for several weeks until they mature. As the cells enlarge and divide, more living tissue populates itself in the disc.

Using MRIs and other tests that determine the growth rate of the tissue, the researchers select the best time to implant the composite disc in the body. Once that is done, the living host cells also grow into the tissue.

In the rat and rabbit testing, Smith and his team used mainly bovine stem cells from cows and their bone marrow. The researchers are using goat stem cells in the goat studies. In any human trials, the cells would be harvested from the bone marrow of the person receiving the disc.

A mechanical disc, normally made from plastic, can be implanted, too. But mechanical discs have potential problems with wear that the biologic disc will not, according to Smith.

"We basically have grown a structure that looks and behaves like a new disc in terms of how it looks under a microscope and how it behaves in biomechanical testing on a machine," Smith says. "That structure is then placed into a disc space. Right now, it's in animals. If this is successful, the goal down the road is you go to an operating room and instead of having your disc taken out and fused or replaced with an artificial disc that's mechanical, your disc is taken out and replaced with a disc that grows into the body and functions like the original one did. The disc is made out of living tissue, so when implanted it can grow into the host and not have the issues that mechanical devices have."

In Smith's view, this procedure has the potential to revolutionize current treatment strategies for people with degenerative disc disease.

He says we are all at risk for disc degeneration as we get older, but that members of the military are becoming more susceptible. Chronic back pain in the Veteran population is responsible for more than 70 percent of chiropractic visits. The annual rate of degenerative disc disease doubled between 2001 and 2010, a period when more than 130,000 active service members were diagnosed with the condition.

"There's a sense that a lot of the younger adults coming out of the service these days have a high susceptibility to lower back issues and neck issues and strains just because there's such demand put on their backs in the modern military with the weight they carry, including body armor, helmets, and backpacks," Smith says. "There may be increased risk for disc degeneration in soldiers who are doing a lot of repetitive heavy load bearing and carrying in the infantry."

The soldier in the Humvee who damaged his intervertebral disc in the roadside blast in Iraq would be a "perfect candidate" for the biologic disc if and when it becomes ready for human trials, Smith says.

"If this technology works 10 years down the road, we can treat him with a biologic disc, and he wouldn't have to have the fusion," the orthopedist says.