A new analysis based on two long-term aging studies—one of Roman Catholic nuns, the other of Japanese American men—provides what may be the most compelling evidence yet that dementia commonly results from a blend of brain ailments, rather than from a single condition. This is often the case even when an Alzheimer's diagnosis has been given, say the researchers.

A team led by Dr. Lon White, with the University of Hawaii and the VA-affiliated Pacific Health Research and Education Institute, analyzed data on more than 1,100 people who had taken part in the Nun Study or the Honolulu-Asia Aging Study. Both studies followed hundreds of aging adults and included brain autopsies upon their death.

The analysis by White's team appeared online in Neurology on Feb. 17, 2016.

"The driving factor seems to be just the total burden of disease."

"The impact on clinical dementia and impairment is largely unrelated to the type of lesion, or type of lesion combination," said White in an email interview. "Rather, the driving factor seems to be just the total burden of disease."

The observation is not new. Based on several studies in the past few years, experts have begun to recognize "mixed pathology" dementia as a relevant model to explain the cognitive losses of older people. White notes that "even the lay public seems to now be appreciating that dementia is often the result not of a single disease process, but of a combination." 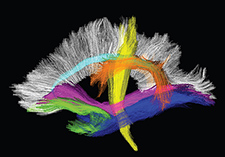 But the new study led by the Hawaii team offers the largest-scale, most comprehensive documentation of the trend to date.

The study included data on 334 nuns and 774 Japanese American men, all of whom completed multiple cognitive assessments as they grew older, and whose brains were autopsied after they died. The average age at death was around 90 for the nuns and 88 for the men.

Based on the autopsies, White's team found predictable rates of five different brain pathologies, all of which can bring on dementia. These included Alzheimer's disease, Lewy bodies, hippocampal sclerosis, microinfarcts, and low brain weight.

The researchers found signs of Alzheimer's in about half the brains. But only in about half of those cases was it the main lesion type. Among 279 participants who had severe Alzheimer's pathology, more than three-quarters had at least one other type of lesion.

Along with this, the researchers observed that most of the participants who had displayed significant levels of cognitive impairment during their final years had few or no Alzheimer's-type abnormalities.

By and large, it was combinations of ailments—rather than any single condition—that correlated most strongly with cognitive impairment. Such combinations had a "dramatic" impact on dementia risk, wrote the researchers.

The nuns with the highest level of comorbidity—the most lesion types, with the greatest overall severity—were 99 times more likely to have cognitive impairment, compared with those with no pathology.

The study documented many different combinations. There were no overarching patterns.

"There are a huge number of possible combinations of lesion types, reflecting what appears to be nearly random linkages among the types," said White. "The probability of each is largely unrelated to the probabilities of the others."

White, a neuroepidemiologist, said the effect of comorbidity appears to be multiplicative, rather than additive. This means, for example, if one type of lesion normally raises the risk of cognitive impairment by a factor of three, and another also raises it threefold, the combined risk increase from the two lesions would be not three plus three, but three times three. In other words, the older person with both lesion types would have a nine-fold risk of cognitive impairment, compared with someone without either pathology.

Says White: "I believe it's because all of these lesion types seem to be broadly distributed around the brain, each involving different neuron types and fields. So the result of their summation reflects the wiping out of multiple different systems within the brain, each required for optimal cognition."

"The bad news," he sums up, "is that it is much worse to have comorbid lesions than to have a single lesion type."

Controlling hypertension may be key

By the same token, White says, the upshot of the findings is that the opportunity to ward off dementia may be broader than currently thought.

"The good news is that preventing any [of the pathologies] will be of benefit to the process of aging-related cognitive decline. We can prevent illnesses currently diagnosed as Alzheimer's disease by preventing any of the other four lesion types, even if we cannot directly prevent the Alzheimer's lesions."

White admits there is not currently an abundance of clinical or lifestyle strategies shown to do that.

But he does underscore the importance of maintaining healthy blood pressure. High blood pressure has been implicated as a contributing factor in most of the lesion types his group studied.

"At this point," says White, "prevention by effective treatment of hypertension in midlife seems to be the only solid approach."