Study points to myelin changes as early marker of Alzheimer's 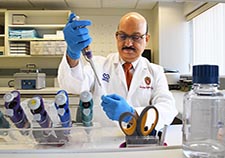 
While in his early 60s, U.N. diplomat and economist Madan Mohan-Sahai Asthana of India began experiencing mild memory problems. He would forget names, dates, and appointments, use the wrong words, and show increasing unsteadiness on his feet with frequent falls. Gradually, his mind deteriorated to the point where he couldn't speak or walk. He was bed-bound when he passed away in 2005 at age 81 after an 18-year bout with Alzheimer's disease.

"It was very, very heartbreaking," his son, Dr. Sanjay Asthana, recalls. "The last two years were very difficult. He was physically very healthy. All he had was Alzheimer's and mild diabetes. It was just tragic."

Sanjay Asthana was a trainee in Alzheimer's research at the National Institutes of Health when he noticed his father's symptoms from the irreversible, progressive brain disorder and referred him to a clinician who made the diagnosis. His father's struggles in the ensuing years served as a major driving force for the younger Asthana to identify Alzheimer's early in patients and work toward treatments that would delay the onset of the disease—which destroys memory, thinking skills, and the ability to carry out the simplest tasks—and also toward a possible cure. 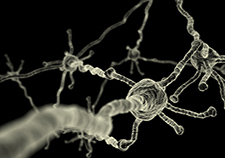 The brain's neurons are able to efficiently relay messages to each other with the help of myelin, a fatty white substance that insulates neuronal fibers. (Photo: iStock/©gecko753)

The brain's neurons are able to efficiently relay messages to each other with the help of myelin, a fatty white substance that insulates neuronal fibers. (Photo: iStock/©gecko753)


Asthana, a VA clinician and researcher who specializes in gerontology and geriatrics, recently co-authored a study that points to a possible preclinical biomarker in the progression of Alzheimer's. The study, published in January 2017 in JAMA Neurology, suggests that early risk factors for developing the disease are linked to changes in myelin, a fatty white substance in the central nervous system that surrounds nerve fibers and ensures that electrical signals between neurons move quickly.

Myelin changes in Alzheimer's are suspected by many researchers but have been understudied in humans. Tissue consisting of myelinatedfibers is calledwhite matter.

"The results from this paper suggest that those changes may play a key role in the onset of the disease," says Asthana, head of the Geriatric, Research, Education, and Clinical Center at the William S. Middleton Memorial Veterans Hospital in Madison, Wisconsin.

"We've found from decades of research that once someone has Alzheimer's symptoms, the brain is damaged to the point where you cannot return it back to improved function"

Much more known about gray matter

Alzheimer's disease involves the deterioration of nerve cells in the brain, which in turn affects thoughts, memory, and language. It's one of the most common forms of dementia and the sixth leading cause of death in the United States.

Scientists believe damage to the brain starts at least a decade before cognitive problems surface, or in the preclinical stage. According to the National Institute on Aging, people seem to be symptom-free during this time, "but toxic changes are taking place in the brain. Abnormal deposits of proteins form amyloid plaques and tau tangles throughout the brain, and once-healthy neurons stop functioning, lose connections with other neurons, and die."

Amyloid plaques and tau tangles, which lead to cell death and tissue loss in the brain, are the two abnormalities that define Alzheimer's.

To date, most of the preclinical research has been on the gray matter of the brain, where most changes due to Alzheimer's take place. The gray matter is the brain's cortex, which is responsible for muscle control, memory, emotions, speech, decision-making, self-control, and sensory perception.

"White matter was always thought to be just an area to connect one part of the brain to the other, so the two different areas can talk to each other," says Asthana, who is also director of the Alzheimer's Disease Research Center at the University of Wisconsin. "No one thought that white matter had more function than gray matter."

According to Asthana, the idea that myelin is involved in Alzheimer's can be traced back several decades to two German doctors who studied degenerative changes in the brain. Heiko Braak and Eva Braak analyzed brains after people died and found that regions that developed myelin later in life were also areas that were first affected by Alzheimer's.

More recently, Alzheimer's research by another co-author of Asthana's study, Dr. Barbara Bendlin of the University of Wisconsin, found through brain scans of middle-aged and older adults that white matter seemed to be damaged. "No one had shown that relationship in living humans before Dr. Bendlin published her paper," Asthana says. "That brought attention to the possibility that white matter changes may be very important in causing Alzheimer's. We wanted to see if this damage is related or unrelated to Alzheimer's disease pathology."

The participants were Alzheimer's asymptomatic but at high risk for the disease because at least one of their parents had it. Asthana explains that any person with Alzheimer's can show changes in myelin regardless of their parents' history with the disease, but that people with a family history are at much higher risk of such changes. His chances of getting Alzheimer's, for example, are up at least 30 percent because his father had the disease, he says.

The researchers used a novel MRI technique that makes it easier to analyze the quantity of myelin content. They tested the participants for four cerebrospinal fluid (CSF) biomarkers consistent with signs of Alzheimer's (beta-amyloid 42, total tau protein, phosphorylated tau 181, soluble amyloid precursor protein). The CSF, which is in the brain and spine and acts as a cushion for the brain's cortex, was extracted with lumbar punctures.

The scientists found widespread changes in myelin content associated with increasing age, including in areas of the brain such as the frontal white matter. The findings showed "for the first time to our knowledge," the researchers write, that lower concentrations of beta-amyloid 42 and higher concentrations of total tau protein, phosphorylated tau 181, and soluble amyloid precursor protein, and their ratios with beta-amyloid 42, are closely linked to changes in myelin content.

"Furthermore, we show that the age-related decline in myelin content is influenced by the levels of CSF biomarkers," the researchers explain. "These findings provide further evidence of white matter involvement, and particularly myelin content, in Alzheimer's pathology and suggest that such changes may be one of the earliest characteristics of the disease process."

Asthana: "Our sample size was only 71. But as we increase that sample size and as brain imaging and other techniques get more refined and improved, we'll have better measures of damage to myelin."

Asthana and his colleagues were surprised by the findings partly because in Alzheimer's research the widely held assumption is that everything takes place in the gray matter of the brain, not in white matter. "So this in some way established that that is not true," he says.

Clarifying the extent of myelin damage in preclinical Alzheimer's may be informative in understanding the course of the disease and may lead to new biomarkers for prevention and treatment trials, according to the study.

Finding may lead to new treatments

"This is a very important finding obviously because it can hopefully lead to new treatments we can use to target changes in myelin and white matter," Asthana says. "Also, this is important evidence that these are people who have preclinical Alzheimer's. The average age was 61.6. So these are young fully functional women and men."

He adds: "The fact that myelin changes correlate with alterations in CSF suggestive of Alzheimer's pathology is strong evidence that the two are related. However, it does not confirm causality. In other words, it's possible that myelin changes could be due to other causes, but that probability is low."

Asthana says any future treatments for myelin changes may be in the form of drugs, but that simply maintaining a healthy diet and lifestyle will be important, too.

Regarding the Veteran population, VA projects about 218,000 former service members will be diagnosed with dementia in 2017, an increase of more than 40,000 from 2008. Many of those Veterans have Alzheimer's.

Asthana is unaware if Veterans are more susceptible to myelin abnormalities than the general population. But he says they are more likely to have risk factors, namely blast injuries and other types of head trauma that can cause brain damage. "When that happens, the myelin is certainly damaged, so that is one scenario that predisposes them to Alzheimer's disease more so than other dementias," he says.

The researcher adds that Veterans have a higher prevalence of PTSD and other psychiatric disorders that have been shown from VA studies to increase the risk of Alzheimer's. Veterans are also at high risk for Alzheimer's because of vascular diseases such as heart disease, diabetes, and high blood pressure, he says. Vascular diseases narrow vessels that supply blood to the brain, resulting in cell damage due to a reduced supply of oxygen and nutrition.

Positioned firmly in the battle against Alzheimer's, Asthana says much more emphasis must be put on pre-symptom interventions—or else a potential treatment may be unattainable.

"We've found from decades of research that once someone has Alzheimer's symptoms, the brain is damaged to the point where you cannot return it back to improved function," he says. "It's very difficult to do that. That's the reason most of the treatments for AD have failed— because they were started too late. A better understanding of the changes that take place in the brains of people without Alzheimer's symptoms provides the best potential to discover new treatments to either delay the onset or slow the progression of the disease."