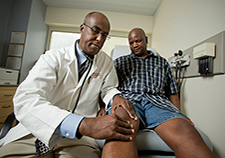 The rate of total knee replacement increased by 120 percent between 2000 and 2009, with much of the growth occurring among osteoarthritis patients ages 45 to 64. Here, Dr. Said Ibrahim examines Lawrence Woodson at the Philadelphia VA Medical Center. (Photo by Tommy Leonardi)

The rate of total knee replacement increased by 120 percent between 2000 and 2009, with much of the growth occurring among osteoarthritis patients ages 45 to 64. Here, Dr. Said Ibrahim examines Lawrence Woodson at the Philadelphia VA Medical Center. (Photo by Tommy Leonardi)

A review and analysis of the existing literature by Iowa City VA Health System and University of Iowa researchers suggests that advanced age by itself should not disqualify people from getting knee replacements.

The findings appeared online Feb. 10, 2016, in the journal BMC Geriatrics.

Knee replacement, known medically as total knee arthroplasty, is a common and effective procedure to treat osteoarthritis of the knee. Knee replacement can relieve severe pain and allow people to carry out everyday actions like walking, climbing stairs, and getting out of chairs. More than 600,000 knee replacement surgeries are performed in the U.S. each year, according to the American Academy of Orthopaedic Surgeons. Knee replacement surgery can cost as much as $10,000 to $20,000, most of which is usually covered by insurance.

Most patients who undergo knee replacement are older, with 75 percent of U.S. patients over the age of 65. The rate of total knee replacement increased by 120 percent between 2000 and 2009, with much of the growth occurring among those ages 45 to 64. Experts say the increase stems from growing acceptance of invasive surgery and recognition of the improvements in pain, function, and independence that knee replacement can provide.

The researchers looked at 22 past studies on the topic.

However, surgical risk and cost may increase with age, especially in older patients with other medical conditions, which may lead to fewer elective total knee replacements. Indeed, patients older than 85 are 41 percent less likely than those under 85 to receive knee replacement surgery, and their doctors may be less likely to even offer the procedure. 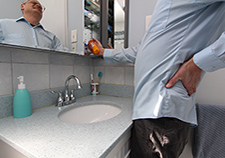 Knee replacement can come with complications

The researchers looked at 22 past articles on the subject, many of which reported on more than one outcome. They combined and analyzed data from the studies to see if they could come to a more definitive conclusion on the risks and benefits of the procedure for older patients.

Twelve studies reported deaths after elective knee replacement, with more deaths reported in older patients. However, the mortality rate during and shortly after this surgery was less than 1 percent.

The authors found nine studies reporting deep vein thrombosis (blood clots in deep veins, usually in the legs) as a complication of knee replacement. These studies were not clear on whether there was a difference between younger and older patients.

Six studies reported longer stays in the hospital after the procedure for an older population compared with their younger counterparts. These studies also showed shorter stays after knee replacement across age groups, suggesting improved surgical and recovery techniques.

The researchers say more studies are needed on the cost-effectiveness of the procedure in older patients.

The authors note that the studies examined were not consistent in their methods and how they measured success. Studies varied greatly in the age ranges used and the follow-up time frames. Some studies found no difference in functioning after surgery or in satisfaction between older and younger populations, while others found more dissatisfaction and worse functioning in older patients.

In any case, while the available evidence does suggest slight increases in mortality and complications for older patients, several studies reported high satisfaction after surgery in both older and younger patients. And importantly, older patients who undergo total knee replacement report better functioning afterward than their age peers who do not have the procedure.

On the whole, older patients who undergo knee replacement face similar risks as younger patients, with comparable improvements, according to the researchers. They conclude: "In patients with good functional status and minimal medical comorbidities, age alone should not contraindicate knee arthroplasty."