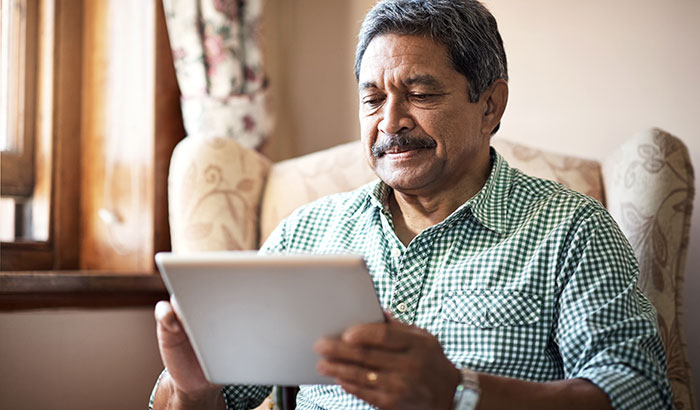 Older Veterans taking part in a VA study on mobile game apps for TBI are playing the games on an iPad for about 30 minutes a day, at least five days a week. (Photo for illustrative purposes only. ©iStock/shapecharge)

Can older Vets with TBIs benefit from mobile game apps?


These Veterans aren’t playing video games to shoot down asteroids, take part in World War II battles, or follow criminals and their efforts to commit heists.

They are, however, striving to improve their mental sharpness.

"Some studies of 'brain games' have shown promising effects, but others haven't."

The study is called the “Brain Aging in Veterans (BRAVE) Training” program. It involves Vets ages 60 to 85 who have a history of repetitive mild TBI, also known as a concussion, or at least one moderate TBI. The Veterans in the study have disclosed cognitive complaints, such as trouble concentrating, getting organized, and remembering things they need to do.

Evidence suggests that involvement in mentally stimulating activities like crossword puzzles and reading may help keep the brain healthy as people age. But whether computer games are the best way to accomplish this is unclear, Kaup says. 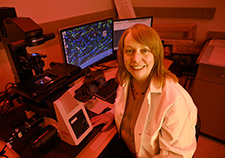 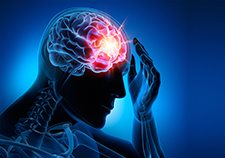 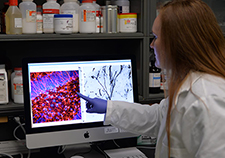 “Some studies of ‘brain games’ have shown promising effects, but others haven’t,” says Kaup, who is also an assistant professor at the University of California, San Francisco (UCSF). “A common finding in past studies that have tested such games is that people may get better at playing the game itself. But that may not necessarily translate into improvements in other cognitive skills or to meaningful benefits in everyday life. We need more research to understand this and to inform whether there may be a type of game that is most likely to help.”

She’s part of a group called the Center for Population Brain Health, which includes researchers from the San Francisco VA and UCSF.

Recently, she authored a study that aimed to capture the neuropsychological impact of lifetime TBI. She studied a group of about 90 Veterans, average age 79. Through neuropsychological tests, she found that the Vets with TBI—compared with those without—were worse off in mental processing speed and complex thinking skills, such as those related to planning, organizing, and completing tasks. The two groups performed similarly in attention, memory, and language skills.

The study appeared in January 2017 in the Journal of the International Neuropsychological Society. It stemmed from the original BRAVE study, a project that compared older Veterans with and without TBI on a series of measures, including cognitive ability, mood, sleep, and physical and motor functioning.

Dr. Kristine Yaffe, the chief of neuropsychiatry at the San Francisco VA and the director of the Center for Population Brain Health, led the original BRAVE study.

Kaup’s pilot study is building on Yaffe’s project and is still in the research phase. Kaup and her colleagues are hoping to enroll 90 older Veterans with TBI in the trial by the end of 2018. About 60 have signed up thus far.

Final results should be available in about a year.

To be enrolled, the Veterans must answer yes to at least one of these questions:

Those selected are randomized evenly into three groups for four-week periods. In two of the groups, the Vets play a video game on an iPad for about 30 minutes a day at least five days a week.

In the multitasking game, a Veteran has to steer down a course and tap the iPAD screen when certain objects appear. The game calls for reacting quickly and doing two things at once.

The main goal in the word-puzzle game is for the player to create as many words as possible by connecting letters on a puzzle board. The game involves visual searching and word knowledge.

Participants in the third group simply go about their regular activities over the four-week period. This group is key to the study, Kaup says, because it helps the researchers understand whether the two other groups are benefiting from the video games.

All three groups complete cognitive tests and questionnaires at baseline, at the end of the four-week period, and at a three-month follow-up visit.

Preliminary results say most participants are enjoying the video games and are finding them easy to use, supporting part of the researchers’ hypothesis. But it’s too early to know if the Vets in the video game groups are improving cognitively.

The connection between TBI and dementia

In the future, Kaup hopes more research by her group and others clears up how TBI influences brain health as people age. There’s not enough research yet, for example, to pinpoint whether having just one mild TBI influences dementia risk, she says. That question is a focus of an ongoing project led by Yaffe that is investigating the long-term effects of mild TBI in Veterans.

Kaup notes that the risk of dementia may depend on how severe the injury is and on how many TBIs a person has had over his or her lifetime.

Most TBI injuries are considered mild. But even mild cases can involve serious long-term effects on such areas as thinking ability, memory, mood, and focus.

“TBI is a relatively common injury experienced by Veterans,” she says. “Some studies, including ones led by others in our group, have suggested that people who have had traumatic brain injuries may be at higher risk for dementia in aging, compared with people who have not. Although more research is needed to understand this, such findings suggest older Veterans who have had a TBI are an important group among whom to try to improve cognitive and brain health.”