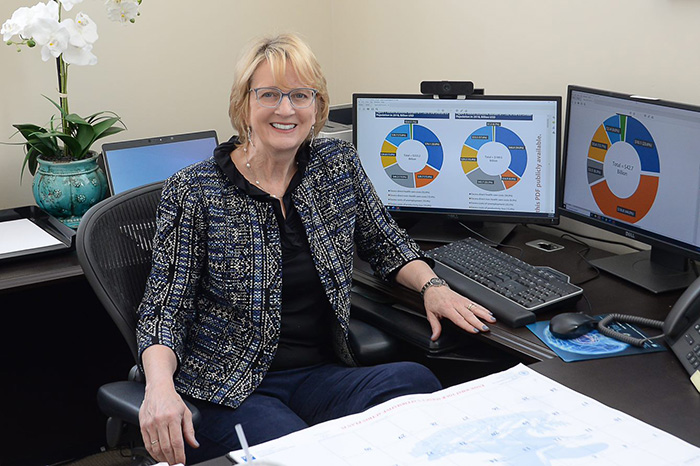 A study led by Dr. Lori Davis of the Tuscaloosa VA brought to light the extent to which PTSD not only impacts Veterans and active-duty military, but civilians, as well. (Photo by Mike Harris)

"With the increasing occurrence of national and societal traumatic events around the world, including COVID-19, civil unrest, and climate change, there is mounting concern of an increase in PTSD and burden in the civilian population."

A new study finds that the national economic burden of PTSD goes beyond direct health care expenses and exceeds the costs of other common mental health conditions, such as anxiety and depression.

The researchers estimated the cost of PTSD at $232.2 billion for 2018, the latest year for which data were available at the time of the study. They called for increased awareness of PTSD, more effective therapies, and the expansion of evidence-based strategies to “reduce the large clinical and economic burden” of that mental health condition.

The results appeared online in the Journal of Clinical Psychiatry on April 25, 2022.

“The $232 billion annual economic burden of PTSD in the U.S. demonstrated in this study is staggering and fuels the urgency for public and private stakeholders to work together to discover new and better treatments, reduce stigma, improve access to existing treatments, and expand evidence-based recovery and rehabilitation programs,” the researchers write.

Dr. Lori Davis, the associate chief of staff for research at the Tuscaloosa VA Medical Center in Alabama, led the study. She and her team used insurance claims data, academic literature, and government publications to estimate the costs of PTSD in both the U.S. civilian and military populations. The latter cohort included active-duty military and Veterans.

Understanding the complex nature of posttraumatic stress disorder, commonly known as PTSD, is one of VA’s most pressing challenges. The agency says many Veterans who fought in Vietnam, the Gulf War, and the post-9/11 conflicts in Iraq and Afghanistan have had that mental health condition sometime in their lives.

PTSD symptoms are well documented: re-experiencing of trauma through flashbacks and nightmares; avoidance of reminders of a traumatic event; changes in thoughts and feelings, such as guilt and emotional numbing; insomnia; and hyperarousal.

Davis and her colleagues noted that more studies on PTSD and its treatments are needed to address the rise in civilians with PTSD, calling that phenomenon a “rapidly accumulating societal burden.” Improved access to effective treatments is also needed, especially for people in economically vulnerable situations,” she noted.

“With the increasing occurrence of national and societal traumatic events around the world, including COVID-19, civil unrest, and climate change, there is mounting concern of an increase in PTSD and burden in the civilian population. As such, the current cost estimate is likely an underestimation given these recent global traumas, the effects of which would not have been captured and are likely to result in increasing negative repercussions.”

‘We have effective treatments for PTSD’

The researchers also found that women represented 66% and 74% of the overall and civilian population with PTSD, respectively, thereby contributing disproportionally to the national costs. Research has shown that trauma-exposed women show higher levels of PTSD symptoms than trauma-exposed men. Plus, traumas such as sexual assault and domestic violence tend to affect more women than men and represent important areas for prevention and treatment. Infographic: The economic burden of PTSD

The study notes that the substantial economic burden of PTSD highlights the “urgent and unmet” need for treating and rehabilitating people with the disorder.

“Experts agree that there is a long-standing crisis in pharmacologic drug development for the treatment of PTSD, as no medication has been FDA-approved for PTSD since the only two marketed agents were approved 20 years ago,” the researchers write. “Additionally, there is a scarcity of evidence on the impact of available pharmacologic and psychological treatments and the interplay between the two on patient-centered outcomes, such as quality of life, well-being, interpersonal relationships, and occupational functioning. A burden that is often ignored in economic calculations is the cost for psychotherapy not covered under health plans, which represents a significant out-of-pocket [expense] for someone with PTSD, as demonstrated in the current study.”

What does all of this mean for getting PTSD costs under control in the future?

“It is important to remember that we have effective treatments for PTSD, ” says Dr. Paula Schnurr, executive director of VA’s National Center for PTSD. “One potential implication of this study’s findings is that increasing treatment could reduce not only the symptom burden on people but also the economic costs to society as a whole.”