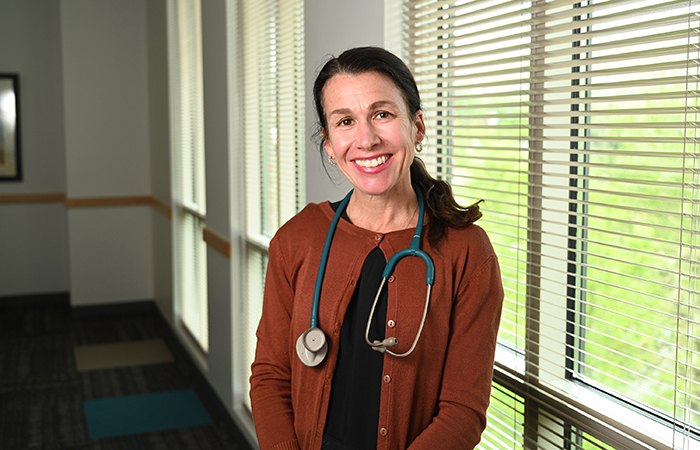 Dr. Tracy Frech, a VA rheumatologist, is working with VA-TEAM in hopes that her software aimed at benefiting Veterans with Raynaud’s phenomenon will eventually reach the marketplace. (Photo by Jeff Grandon)

From concept to reality

"The amount of investment they put in to make sure that you do a really good job at getting a product that is exciting to the people you're pitching it to is commendable."

A rheumatologist at the VA Salt Lake City Health Care System, she has long sought to improve care for patients with a condition called Raynaud’s phenomenon, a decrease in blood flow mostly to the fingers and toes usually because of cold, stress, or emotional suffering. The most severe cases can lead to amputation.

Frech launched a telemedicine program at VA in 2011 and learned, for one, that many of her patients had suffered injuries to their fingers due to bitter cold temperatures while serving in Afghanistan. She also received complaints that some patients weren’t getting timely evaluations.

“One of the issues with Raynaud’s phenomenon is that 95% of the time, it’s okay for a delay,” she says. “Patients eventually get a rheumatologist. But in about 5% of patients, an earlier diagnosis can lead to outcomes that are substantially better, and we can save fingers. I thought to myself I wish we had the ability of getting patients in sooner using advances in telemedicine.” 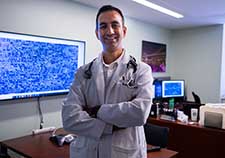 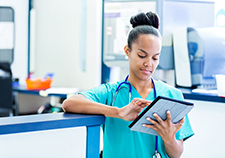 Frech, who is also affiliated with the University of Utah, envisioned a software package that would allow a patient to upload an image of the base of the finger. The software would analyze the photo and pull the relevant data to get the patient to the right health care provider, assigning urgency to those who possibly have Raynaud’s phenomenon.

But Frech needed help in developing the concept and understanding how to get it to market so it would have value to all stakeholders, including patients, hospital administrators, and physicians in primary care, surgery, infectious disease, and rheumatology. She thus turned to a new program that calls for trained business advisors to provide education, mentoring, and other assistance to VA researchers who are pioneering VA-funded innovations that can potentially reach the marketplace.

In Frech’s case, the VA Translational Education and Mentoring Center (VA-TEAM) has offered direction through videos, consultation, and other means on refining her software so it can be approved by the U.S. Food and Drug Administration (FDA). Her product was one of 16 VA innovations accepted into phase one of VA-TEAM based on its potential to qualify for a VA technology transfer license to industry. A committee of business experts and VA representatives chose the innovations, each of which was assigned a project manager and business advisor.

The chosen projects had to include VA-owned intellectual property.

Eight of the 16 projects will be tapped for phase two, which provides a much more hands-on and comprehensive experience for the researchers. Phase 2 involves weekly meetings with an advisor and work in understanding each project’s unique approach to government regulations, development, testing, and implementation, among other things. The researchers also spend much time learning how to communicate the value of their inventions to a business- or investment-minded audience.

Frech has been impressed with the guidance provided by VA-TEAM.

“The real strength in the program is not just in the videos,” she says. “They meet with you every week to talk about where you’re at with the product, how you can develop it further, how to reach more stakeholders, and how your interviews are going. The amount of investment they put in to make sure that you do a really good job at getting a product that is exciting to the people you’re pitching it to is commendable. They also walk you through all of the paperwork. Presentations explain patents and therapeutics and how you get things to market. Not only is it what I would say an educational program. It really determines how to put your best product forward.”

VA-TEAM grew out of the belief that too many VA investigators have been unable to move their innovations from concept to the marketplace, says Dr. Arun Sharma, a health science officer in the Office of Research and Development. BLR&D thus created surveys in 2019 to assess what type of support VA researchers need to advance their inventions to the commercial stage. The surveys essentially asked, “We have funding, what else would you like us to do?” Sharma notes.

Some 50 associate chiefs of staff for research and development at VA hospitals and more than 600 VA investigators responded to the surveys, according to Sharma.

“We learned that investigators would like to have translational education and mentoring support to help guide their discoveries from the early stages all the way to getting FDA approval and to clinical use,” he says. “To do that, we announced a funding mechanism that was open to all VA investigators and established a VA-Team center at one of the larger VA facilities. VA-TEAM would provide education and mentoring to translate the invention discovery to a level where FDA could say, `Yeah, this could be evaluated in humans as an investigational new drug. The thing you have is commercially attractive to small biotech companies.’ Or the FDA can approve it so our investigators can test it in clinical trials with our Veterans to see if it’s working or not. We provide that support structure.”

Not all projects have the potential to reach the marketplace

Some projects, Sharma adds, take at least five years to move from the research phase, for example, to FDA approval. They need a lot of guidance and other types of support during that period.

“We’re hoping we can continuously attract VA investigators and provide them an opportunity, so if they have something interesting they believe can benefit Veterans, we have an organization that will support them in moving that to clinic,” he says. “When researchers have a discovery, instead of saying, `Oh great, this is a good idea,’ but then leave it on their  notebooks, they can reach out to VA-TEAM or to us in ORD and ask, `How can I move this forward?’ That’s basically what we’re trying to do from the ORD side: build infrastructure and support for VA investigators so they can move their products. The hope is that we continuously see a lot of things discovered in VA move to clinic and benefit our Veterans.”

VA-TEAM, which was officially launched in January 2021, is funded for five years. There will be five one-year waves of projects in the phase one category, followed by a respective phase two in each of the five years.

It’s important to remember, Cornwell stresses, that not all research is translational in nature. VA also funds valuable basic science research, but there has been a renewed emphasis at government funding agencies—especially VA, DOD, the National Institutes of Health, and the National Science Foundation—to improve the quality of research on projects that have the potential to reach the marketplace, he says.

“Programs like VA-TEAM have been very successful in preparing research teams for their commercialization paths,” Cornwell says. “We hope to carry on that successful trend.”