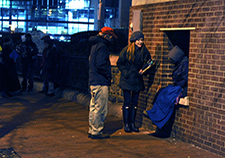 VA outreach workers speak with a Veteran during the 2015 Point-in-Time Homeless Count in Baltimore. (Photo by Robert Turtil)

VA outreach workers speak with a Veteran during the 2015 Point-in-Time Homeless Count in Baltimore. (Photo by Robert Turtil)

Compared with Veterans who are still homeless, those in VA permanent supported housing receive outpatient care for more diagnoses, according to research now online in the Journal of Primary Care and Community Health.

The finding is not surprising, partly because VA supported housing includes more than just a roof over one's head: It also includes case management by a social worker and referrals to primary care.

But still, the finding underscores the positive impact that such programs appear to have on Veterans' overall health care.

"Permanent supported housing may reduce disparities in the treatment of diagnoses commonly seen in ambulatory care."

Dr. Sonya Gabrielian and colleagues looked at data on 3,631 Veterans in all. During the study period, fiscal 2011, roughly half the study population was housed in apartments and receiving case management through VA Supported Housing (VASH). The others were still homeless.

VASH follows the Housing First philosophy, which encourages the provision of long-term housing even before patients show evidence of recovery from mental health or substance use issues.

The researchers considered 26 diagnoses commonly treated in primary care. They found that VASH Veterans received care for 2.9 diagnoses, on average, versus 1.7 for currently homeless Veterans.

After the team adjusted for factors relating to demographics and health care needs, they found that VASH Veterans were about twice as likely to receive treatment across categories: chronic and acute physical illness, mental illness, and substance use disorders. 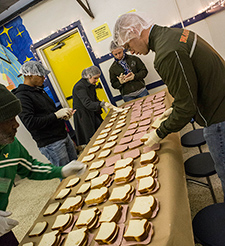 There also appeared to be an edge in continuity of care: VASH Veterans with chronic illness were more likely to have two or more visits to treat their problems.

The study doesn't necessarily prove a cause-and-effect link between supported housing and improved health care. Veterans weren't randomly assigned to VASH—they chose to enroll in it on their own, provided they met the eligibility criteria. So they may have inherently had different characteristics than Veterans who did not seek out the program and who remained homeless. Those traits, and not VASH itself, may have also impelled them to seek out more medical care.

But to the extent that the researchers could adjust for medical needs and demographics—including age, gender, race, and ethnicity—they say it is plausible that VASH, and not other factors, is what enabled more medical treatment.

VA offers a variety of services for homeless Veterans. For information, visit www.va.gov/homeless. To learn more about VA research on homelessness, visit www.research.va.gov/topics/homelessness.