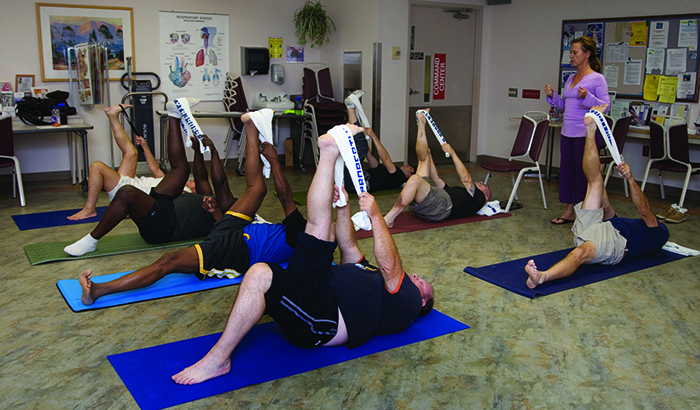 A San Diego VA study among Veterans with chronic low back pain found that those who completed a 12-week yoga program had better scores on a disability questionnaire, improved pain intensity scores, and a decline in opioid use. (Photo by Kevin Walsh) Dr. Erik J. Groessl is a researcher with the VA San Diego Healthcare System and the University of California, San Diego. (Photo by Kevin Walsh)

Dr. Erik J. Groessl is a researcher with the VA San Diego Healthcare System and the University of California, San Diego. (Photo by Kevin Walsh)

In a study including 150 military Veterans with chronic low back pain, researcher Dr. Erik J. Groessl and his team from the VA San Diego Healthcare System found that Veterans who completed a 12-week yoga program had better scores on a disability questionnaire, improved pain intensity scores, and a decline in opioid use.

Groessl is a researcher with the VA San Diego Healthcare System and the University of California, San Diego School of Medicine. The study was published in the American Journal of Preventive Medicine on July 20, 2017.

"To be able to reduce the reliance upon opioids and other medications with side effects, it is crucial to establish evidence showing mind-body practices like yoga provide benefit in both Veterans and non-Veterans with chronic pain," he said.

The study is one of the first to demonstrate the effectiveness of yoga specifically in military Veterans.

Veterans in the study who were randomized to the yoga group attended a 12-week yoga program immediately after randomization. Comparison participants were invited to attend the yoga intervention only after six months.

The 12-week yoga intervention consisted of two 60-minute instructor-led yoga sessions per week, with home practice sessions encouraged. The intervention was based on hatha yoga, which involves yoga postures and movement sequences, along with regulated breathing and mindfulness meditation.

Outcomes were assessed at the baseline, six weeks, 12 weeks and six months.

Both study groups had reductions in disability scores after 12 weeks. However, notable differences emerged at the six-month assessment, with scores continuing to drop in the yoga group but increasing in the delayed-treatment group.

Along with those improvements, pain intensity decreased in the yoga group at all three time periods, while the delayed-treatment group had negligible changes.

There was also a 20 percent drop in opioid pain medication use at 12 weeks in both groups as determined through self-report questionnaires and a review of medical records.

Notably, reductions in disability and pain intensity were found despite the reductions in opioid use and other medical and self-help pain treatments at six months.

The trial confirms the findings of two prior randomized controlled trials with non-Veterans showing that yoga is safe and can reduce pain and disability among adults with chronic low back pain.

The study is one of the first to demonstrate the effectiveness of yoga specifically in military Veterans, a population that faces more health challenges and may be harder to treat than non-VA populations, say the researchers. They point out that as with other non-drug treatments for chronic low back pain, yoga may not help everyone or may not completely eliminate chronic low back pain, but reduced pain and disability can often maintained long-term with ongoing yoga home practice.

Military Veterans and active duty military personnel have higher rates of chronic pain than the general U.S. population, and the back is the area of the body that is most commonly affected. In addition to pain, those with the condition also report increased disability, psychological symptoms, and reduced quality of life. In the U.S., chronic low back pain is the leading cause of lost productivity and the second most common cause for physician visits. Billions of dollars are spent each year in the U.S. on health care related to back pain.

The team says that given the results of their study, VA facilities nationwide may want to consider developing and expanding formal yoga programs to help Veterans with back pain. Many VA facilities already do offer yoga classes, along with other complementary and integrative health programs.

The research was funded by VA Rehabilitation Research and Development.