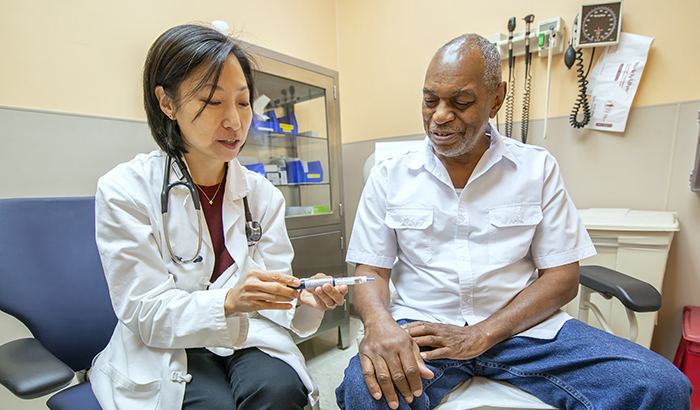 Dr. Mary Rhee, a physician-researcher with the Atlanta VA and Emory University, discusses the use of an insulin pen with VA patient Joseph Fields. (Photo by Lisa Pessin)

Random plasma glucose tests could be used to predict which patients will develop diabetes, according to a study of Veterans Affairs treatment data. Researchers from several VA systems showed that levels of glucose found during standard outpatient medical testing revealed patients' likelihood of developing diabetes over the next five years, even when glucose levels did not rise to the level of diabetes diagnosis.

The findings could lead to earlier treatment and better outcomes. The research shows that glucose levels that normally would not be seen as indicating diabetes risk can in fact predict the disease's development. According to the researchers, using plasma glucose levels in blood samples taken during normal doctor visits "could signal the need for further testing, allow preventive intervention in high risk individuals before onset of disease, and lead to earlier identification of diabetes." 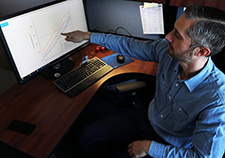 Diabetes is a major health problem in the United States, yet over 7 million Americans with diabetes go undiagnosed, according to the Centers for Disease Control and Prevention. Early diagnosis allows the use of lifestyle changes or medications that could help prevent or delay the progression from prediabetes to diabetes and help keep diabetes from worsening. When diagnosis is delayed, diabetes-related complications could develop before treatment starts.

"Although screening for prediabetes and diabetes could permit earlier detection and treatment, many in the at-risk population do not receive the necessary screening," notes Dr. Mary Rhee, lead author on the study and a physician-researcher with the Atlanta VA Health Care System and Emory University.

The American Diabetes Association recommends testing for diabetes using a few different methods: a fasting glucose level, an oral glucose tolerance test (which requires fasting and ingestion of a glucose load), a HgbA1c level (a measure of average blood glucose levels over the previous two to three months), or a random plasma glucose when accompanied by symptoms caused by high glucose levels. A random plasma glucose of 200 mg/dL (milligrams per deciliter) or higher is usually the threshold for a diagnosis of diabetes. It can be done at any time, and does not require fasting or withholding meals.

These tests are frequently included in routine labwork patients undergo during or after outpatient medical appointments. However, since many patients are not fasting when they get their blood drawn, routine blood tests with random glucose levels below 200 mg/dL have not previously been deemed useful for diabetes screening.

VA researchers examined data on these routine blood tests to see whether random plasma glucose levels could in fact predict which patients would develop diabetes in the future. They studied data on more than 900,000 VA patients who were not already diagnosed with diabetes. All patients had at least three random plasma glucose tests during a single year. Most of these tests were likely obtained "opportunistically"—that is, during regular doctor visits not specifically related to diabetes screening.

Over a five-year follow-up, about 10% of the total study group developed diabetes. Elevated random plasma glucose levels, though not meeting the diagnostic threshold for diabetes, accurately predicted the development of diabetes within the following five years. Patients with at least two random plasma glucose measurements of 115 mg/dL or higher within a 12-month period were highly likely to be diagnosed with diabetes within a few years. Glucose levels of 130 mg/dL or higher were even more predictive of diabetes.

Development of diabetes was infrequent in subjects whose highest random plasma glucose levels were below 110 mg/dL.

In light of these findings, the researchers recommend that patients receive follow-up diagnostic testing for diabetes, such as a fasting glucose or A1c test, if they have two random glucose tests showing levels 115 mg/dL or higher. This approach would very likely be cost-effective, they say, because clinicians can use testing that is already being done during routine outpatient visits. Using random glucose levels for screening could identify patients at higher risk for diabetes, leading to earlier intervention to prevent or control the disease.

"These findings have the potential to impact care in the VA and in the general U.S. population," explains Rhee, "as random plasma glucose levels—which are convenient, low-cost, and ‘opportunistic'—could appropriately prompt high-yield, focused diagnostic testing and improve recognition and treatment of prediabetes and early diabetes."