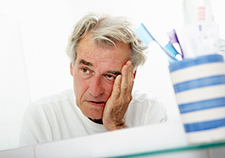 The use of testosterone replacement therapy has more than tripled in recent years in the U.S., to help men with problems such as low energy, depression, and low sex drive. VA researchers looked at whether VA doctors are prescribing the hormone in the ideal manner. (Photo for illustrative purposes only. ©iStock/Cathy Yeulet)

The use of testosterone replacement therapy has more than tripled in recent years in the U.S., to help men with problems such as low energy, depression, and low sex drive. VA researchers looked at whether VA doctors are prescribing the hormone in the ideal manner. (Photo for illustrative purposes only. ©iStock/Cathy Yeulet)

Only a small proportion of men who received a testosterone prescription from VA between 2009 and 2012 underwent appropriate testing, and some received the therapy despite important contraindications.

That's the main finding from a study of more than 111, 000 Veterans at VA outpatient clinics nationwide, published in the September 2015 issue of Medical Care.

The research was led by Dr. Guneet Jasuja, a research health scientist with the Center for Healthcare Organization and Implementation Research at the Bedford (Mass.) VA Medical Center. Jasuja is also on the faculty at Boston University School of Public Health.

She and her colleagues found that new testosterone dispensing in VA increased by 78 percent from 2009 to 2012, from about 20,000 to 36,000 prescriptions, in line with nationwide trends. A previous study had found that in the U.S. in general, use of the therapy more than tripled between 2001 and 2011.

Along with the sharp rise in prescriptions in VA, though, only 3 percent of patients received a full, proper evaluation prior to receiving the drug, according to the new study. Based on the Endocrine Society guidelines used in the study, this would require patients to have their morning testosterone levels checked at least twice, along with certain other laboratory tests. It would also require their doctors to rule out any contraindications.

Men who have elevated levels of prostate-specific antigen, for example, should not get testosterone, as it can cause a prostate tumor to grow. Another contraindication would be a high hematocrit, the percentage of red blood cells in the blood. Extra testosterone can trigger production of these cells beyond normal levels.

In the study, nearly 17 percent of the men who got a prescription did not have their testosterone level checked at all, let alone in the ideal manner.

As for contraindications, the study found that at baseline, 1.4 percent of those receiving a prescription had prostate cancer, 7.6 percent had obstructive sleep apnea, and 3.5 percent had a high hematocrit.

Regardless of the exact testing protocols the doctors may have followed—or not—fewer than half the patients had a properly documented diagnosis of male hypogonadism—the medical term for low endogenous levels of testosterone. Generally, low levels, along with an associated condition or symptom, such as depression, fatigue, or low sex drive, is considered the baseline requirement for a man to receive a testosterone prescription. Guidelines caution doctors against giving the drug simply to help men address such symptoms, without the proper medical work-up.

Jasuja's team says it could be that more of the men did in fact receive a formal hypogonadism diagnosis, only it wasn't coded properly in their electronic medical record, and thus didn't show up in the study results. However, that would still point to a quality problem that needs to be addressed, the researchers say.

The team also checked to see if a subgroup of about 8,200 Veterans who were Medicare enrollees may have gotten their levels checked through that system, by non-VA doctors, before receiving their testosterone prescription in VA. They found that nearly half these patients did in fact receive the outside testing, which somewhat mitigates the main finding about the lack of testing in VA.

Overall, though, Jasuja's group still concluded that "only a small fraction of men prescribed testosterone in the VA...underwent an appropriate diagnostic evaluation and ascertainment of contraindications for testosterone therapy before receiving testosterone."

In their paper, the researchers cite similar findings from non-VA studies, suggesting a "pervasive quality of care issue that needs to be addressed both within and outside VA."

Jasuja said it's difficult to make direct comparisons between VA and non-VA prescribing habits, because of structural differences across systems, but she says the problem may in fact be less acute in VA.

"VA has a well-organized pharmacy service, a centralized national formulary, and a highly function electronic medical record," she says. Overall, she notes, "there is more guideline-driven treatment in VA compared to outside VA."

Be that as it may, why the poor performance by prescribers? Jasuja and her coauthors write: "Potential reasons...include unfamiliarity with the guidelines, unawareness that the guideline applies to a given patient, promotion of some drugs through pharmaceutical company advertising, [and] physician overreliance on clinical experience rather than scientific data...." They also suggest that patient demand, driven by heavy advertising of testosterone products, could influence doctors in some cases.

The answer, they suggest, may lie in better education for physicians. In particular, doctors may need better strategies to respond to patient requests for such therapy.

Jasuja says her group is now working on an alert that would appear for primary care providers every time a testosterone prescription is entered in the electronic medical record, reminding them, she says, of "the current guidelines and recommendations on testosterone therapy as mandated by expert bodies." For now, the effort is focused only on the VA region where the group is based.

She says the team also plans to develop a "multifaceted intervention aimed at educating both patients and providers through targeted materials and programs to modify current testosterone prescribing patterns and optimize appropriate use of testosterone in VA."

Jasuja was joined on the study by colleagues from the Bedford VA and from Brigham and Women's Hospital, part of Harvard Medical School.