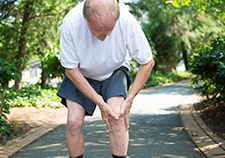 Up to 180 Veterans with knee osteoarthritis, age 40 or older, are taking part in a VA trial of low-intensity ultrasound to treat the problem. (Photo: ©iStock/nandyphotos)

Up to 180 Veterans with knee osteoarthritis, age 40 or older, are taking part in a VA trial of low-intensity ultrasound to treat the problem. (Photo: ©iStock/nandyphotos)


For the 30 million or so Americans who have osteoarthritis, joint pain and stiffness can be a daily battle. Various treatments can offer some relief, but, says VA's Martha Finco, "there are currently no FDA-approved treatments that build new, or repair damaged, cartilage."

Along with inflammation, the breakdown of cartilage—the smooth, whitish, elastic tissue found in joints—is the hallmark of osteoarthritis, the most common form of arthritis.

Finco's team is testing a potential new therapy that promises to regenerate cartilage. They hope it can eventually be a viable alternative to drugs or surgery.

The therapy is called pulsed low-intensity ultrasound (PLIUS). The pilot trial, now underway in Salt Lake City, San Diego, and Dallas, will involve 180 Veterans in all, all age 40 or older. It runs through 2019. The study is a phase 2 trial, meaning it's intended to assess safety as well as efficacy.

Finco, the study's national coordinator, says preclinical findings on PLIUS have been positive.

"Should PLIUS slow or prevent cartilage degeneration, this would be an important advance in understanding and ultimately treating osteoarthritis."

"The results regarding evidence of cartilage regeneration were encouraging in both in vitro models [tests on cells, in Petri dishes] and animal models in the laboratory," she says. Results from a few small clinical trials have been inconclusive. The new VA effort is the largest study of PLIUS to date for knee osteoarthritis.

Ultrasound technology is widely used in medical imaging. One well-known application is showing expectant parents images of the developing baby.

Underlying the technology are sound waves. According to animal experiments, these same waves can mechanically stimulate the growth of new cartilage. 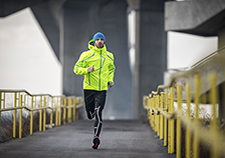 The handheld device being used in the new VA-sponsored clinical trial, called the Exogen, is already approved by the FDA to promote bone healing after fractures. It's considered an investigational device for the VA study, though, since its utility in cartilage regeneration is unknown.

One group of Veterans in the study will self-apply the treatment to the inner side of the knee for 20 minutes a day for 48 weeks.

"This is the area of the knee that generally bears the patient's weight and is most commonly involved in osteoarthritis," explains Finco.

A second group of study volunteers will do the same thing—except they will use a sham device that looks and feels like the real thing.

The Exogen kit comes with a neoprene strap that is worn around the body part to be treated—the knee, in this case. Fitted in the strap is a circular transducer, which emits the ultrasound waves.

"It looks like a big wristwatch," says VA and University of Utah rheumatologist Dr. Daniel Clegg, lead investigator on the study.

The researchers will take before and after pain measures for both groups, and use MRI scans to check for new cartilage growth.

The Veterans in the study, as well as their caregivers and the researchers, will be "blinded" as to whether the real or sham treatment was received.

Results will be especially relevant for Vets

Finco notes that even if the results from the clinical trial are positive, further research would be needed before the treatment can be approved by the FDA and become widely available.

That said, she notes that "should PLIUS slow or prevent cartilage degeneration, this would be an important advance in understanding and ultimately treating osteoarthritis."

The findings will be especially relevant for Veterans, a population in which Clegg says osteoarthritis is "rampant." That's partly because of their military experience, he notes. He cites a 2011 study by Army researchers that found higher rates of the condition in military populations than in comparable age groups in the general population, presumably because of the physical strain entailed in military service.