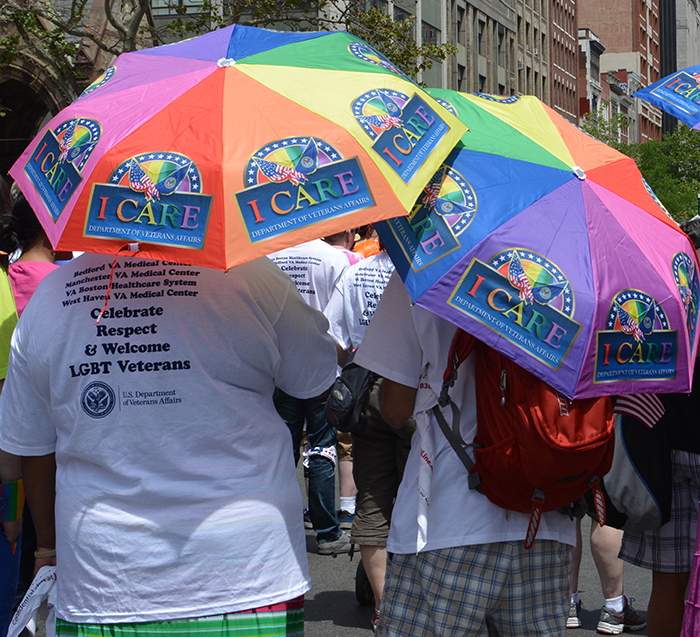 A scene from the 2015 Boston Pride Parade and Festival, featuring the participation of the Boston and Bedford (Massachusetts) VA medical centers. (Photos courtesy of Bedford VAMC)

"This is an optimistic and promising finding...and perhaps reflects the recent advances in transgender health in VA."

Most transgender Veterans who use VA health care are satisfied with their care, according to a VA Puget Sound Health Care System study.

The results were published in the September 2017 issue of the journal Medical Care.

The results show that transgender men – individuals who identify as men but were female at birth – were more likely to be dissatisfied with mental health care than transgender women – those who identify as women but were male at birth. However, the researchers say that it is hard to draw conclusions from this result because of a small sample size of transgender men. The study population was 85 percent transgender women. This is likely because of two reasons, explain the researchers. First, a majority of Veterans are male sex at birth. Second, gender dysphoria is three times more likely to occur among natal males than females.

Despite the good news, the study also found areas where VA needs improvement. Of the 298 Veterans surveyed, 46 percent said they delayed seeking needed medical care in the past year, while 38 percent delayed seeking mental health care. These numbers are higher than in other populations in the U.S. For example, about 19 percent of women Veterans delay seeking health care in a given year, while 23 percent of the transgender community as a whole delay seeking care.

The most common reason for delaying seeking care, according to the Veterans’ survey responses, was an inability to afford it. While VA provides medical care without cost for all service-connected disabilities and conditions, some Veterans may need to pay a copay for non-service-related care. Transgender people are more likely to have a low income compared with the general population, according to the researchers, so this barrier to care may be especially prominent for this population. Lower income was associated with more dissatisfaction with VA medical care in the study group.

Other common reasons for delaying care were fear of disrespect or discrimination, being unable to take time off work, and transportation difficulties. The results showed, not surprisingly, that Veterans who experienced harassment in medical settings were more likely to delay medical care than those who did not. The researchers believe addressing the negative experiences of transgender Veterans is an important step to take. They wrote, “Greater understanding of transgender Veterans’ experiences in health care systems … could inform future efforts to improve care.”

‘As long as they are Veterans, we are there for them’

The results of this study reflect VA’s efforts to improve health equity in its health care system. VA Secretary David J. Shulkin, in a statement to the Times-Picayune of New Orleans on July 29, 2017, reasserted VA’s commitment to caring for all Veterans: “Our commitment will be: As long as they are Veterans, we are there for them for life, and we will continue to care for all Vets. … As long as there are Veterans who we serve who are transgender, then we will continue to provide them services.”

Although a majority of transgender Veterans was satisfied with VA medical care, the researchers explain that there is more work to be done. They point out that transgender individuals are “a health population facing widespread disparities, stigma, and discrimination.” Further, some of the most vulnerable groups – those with lower income, with a minority gender identity (transgender men), and with depression or PTSD – experienced the most dissatisfaction with care. “Interventions that target the health care setting or engage these Veterans may be a valuable step to achieving health equity and more satisfying health care experiences,” wrote the researchers.