Unleashing the power of the grape: Researchers revisit resveratrol 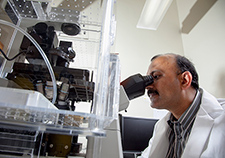 Dr. Nihal Ahmad, a biochemist, is seeking natural compounds that fight cancer. Much of his research is focused on the compound resveratrol, found in red grapes and some other foods. (Photo courtesy of UW Carbone Cancer Center)

Dr. Nihal Ahmad, a biochemist, is seeking natural compounds that fight cancer. Much of his research is focused on the compound resveratrol, found in red grapes and some other foods. (Photo courtesy of UW Carbone Cancer Center)

Search PubMed, and you'll find nearly 5,000 scientific articles with the word "resveratrol" in the title, going back to the 1980s. This antioxidant, found most abundantly in red grapes, is one of the most-studied natural compounds in the world. Evidence suggests it can fight cancer, boost heart health, ease diabetes, and protect brain cells, among other benefits.

But researchers hoping to turn the potent phytochemical into a viable medical therapy have hit a roadblock. It turns out the compound—at least when taken in isolation, outside a whole food—is very poorly absorbed.

Most of it, says VA research chemist Dr. Nihal Ahmad, passes out of the body before it can work its magic on cells and tissues.

"Following oral intake, the majority of resveratrol is rapidly metabolized and excreted via the urine," he says.

That is one of the problems Ahmad's group is trying to solve. His lab, at the Madison VA Medical Center and the University of Wisconsin, studies how to harness natural compounds to reign in cancer. Resveratrol shows great potential, he says—provided the absorption conundrum can be solved.

One possible answer may lie in an unlikely source: black pepper. In 2011, Ahmad's team was the first to show that pairing resveratrol with piperine, the alkaloid that gives black pepper its pungency, can boost blood levels of resveratrol.

(If you're looking for an interesting appetizer to serve, you may want to try "pickled grapes with cinnamon and black pepper." A few recipes for it can be found on the Internet, and the unusual combination just may give you a nice dose of resveratrol, for what it's worth.) 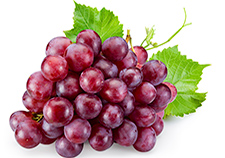 Red grapes are one of the best sources of resveratrol in the diet. (Photo: ©iStock/anna1311)

Red grapes are one of the best sources of resveratrol in the diet. (Photo: ©iStock/anna1311)

Ahmad and colleagues are studying the resveratrol-piperine link further. Results from a small clinical trial they conducted on the topic are now being analyzed.

Some supplement companies already market resveratrol-plus-piperine products, based on the early lab results from Ahmad and others. But the biochemist urges caution before consumers try such products:

"I think we should be careful in this regard," says Ahmad. "Unless more detailed preclinical and clinical studies are done, including long-term studies, we are not able to make any recommendations."

Another supplement company has a product that combines trans-resveratrol—a specific form of resveratrol that may be more absorbable—with other natural compounds that have been shown, at least in mice, to enhance resveratrol's availability in the body.

One is quercetin, a flavonoid that gives many fruits, vegetables, and flowers their color. Another is curcumin, the active ingredient in the popular Indian spice turmeric.

He does point out that giving curcumin along with resveratrol somehow works to maintain zinc levels in the body. That could have implications for cancer therapy, as zinc is known to inhibit certain tumors. His lab now has NIH funding to study whether directly supplying zinc along with resveratrol can thwart prostate cancer in rodents.

One twist in the whole resveratrol riddle has been research by a team at the University of Leicester in the United Kingdom. Their work suggests, intriguingly, that even though resveratrol does get quickly broken down, the metabolites of that process come back together inside colon cancer cells to deliver a therapeutic punch.

Ahmad points out, interestingly, that colon cancer is one of the few areas where resveratrol has a decent track record in human clinical trials.

"It's been found to be mildly successful in colon cancer clinical trials," he says, although he offers a different theory on the mechanism: "It's possibly because of direct contact of resveratrol with colonic tissues, and prolonged exposure of those tissues to the compound."

So it could be that blood levels of resveratrol are not the only measure of absorption that researchers should pay attention to.

While Ahmad's lab and others continue to study the compound, he is also a strong advocate of the whole-food approach, especially when it comes to resveratrol. Remember quercetin, mentioned above? When you eat muscadine grapes—one of nature's richest sources of resveratrol—you also get a bit of quercetin, along with numerous other phytochemicals. The point is, there might be dozens or even hundreds of compounds in the simple grape—as in other fruits—that aid in the absorption and use of resveratrol in the body. And resveratrol might in turn do the same for other nutrients.

"Grapes are estimated to possess more than 1,600 phytochemicals," the actual composition of which varies greatly among varieties, says Ahmad. These are in addition to numerous vitamins and minerals.

This highly intricate, sublime synergy among phytochemicals can be pulled off only by Mother Nature. Though scientists have identified all those compounds in the grape, they are still far from understanding the delicate dance among them, how they all work together.

'Disease prevention is a lifestyle issue'

In an August 2015 article, Ahmad and two colleagues suggested that consuming whole grapes, in whatever form, might indeed be the better strategy for disease prevention and wellness, whereas isolating specific grape phytochemicals, and perhaps using them in certain combinations, probably as an adjunct to conventional treatment, might be more effective in dealing with existing disease.

"In my thinking, disease prevention is a lifestyle issue," he says. "A resveratrol-rich diet could be useful for maintaining a healthy lifestyle. This is not difficult to do, as resveratrol is found widely in a variety of foods."

He points out that a gram of red grapes packs about 50 to 100 micrograms of the compound. A single seedless grape weighs about 5 grams, so it'll contain up to 500 micrograms or so. Eat 20 grapes, and you're at 10 milligrams. That's still only a fraction of the amount of resveratrol found in most supplements on the market, but then again, it's the entire package—the synergy of the nutrients—that matters. Then combine those grapes with a few other brightly colored fruits and vegetables throughout the day, and who knows what healing miracles are taking place within your body. Cancer, look out!

Ahmad is fond of quoting food author Michael Pollan, who, in his 2008 book In Defense of Food: An Eater's Manifesto, wryly summed up decades of medical research on preventing cancer and other diseases: "Eat food, not too much, mostly plants."

Along with the whole-foods approach, if here and there scientists are able to isolate a natural ingredient such as resveratrol and figure out how to harness it against disease, all the better. Ahmad's lab, for one, continues to look at resveratrol and several other naturally occurring compounds.

"I think nature is a great source of very useful resources that can provide an answer to a variety of diseases," he says.

He points to the widely used cancer drug paclitaxel (sold as Taxol), made from yew bark, as one example among many.

As a scientist, Ahmed humbly acknowledges the ancient wisdom found in native medical approaches such as Ayurveda, from India. The wine-like remedy drakshasava, for example, is made from grapes and is used as a heart tonic, and it has been shown to be rich in resveratrol.

At the same time, he asserts that even time-tested traditional remedies need to pass scientific muster.

"Traditional medicines should be thoroughly tested by modern-day standards for their benefits, risks, and any toxicities, before being used clinically or even as a supplement."

In the meantime, pickled grapes with black pepper, anyone?

Researchers at VA's Advanced Platform Technology Center in Cleveland are testing whether resveratrol can boost the performance of brain electrodes.

Dr. Evon Ereifej, funded by a VA Career Development Award, will build on work done by Dr. Jeffrey Capadona at the center. Capadona's lab has shown that giving resveratrol and other antioxidants to quell inflammatory responses in the brain may extend the viability of implanted electrodes over time.

VA researchers and others are developing brain-computer interfaces, using tiny electrodes implanted in the motor cortex, that enable people to move computer cursors with their thoughts, or to control robotic prosthetic limbs—or even their own paralyzed limbs. The work holds promise for those with spinal cord injury, stroke, ALS, traumatic brain injury, Parkinson's disease, and other conditions.

In animal experiments, Ereifej will combine resveratrol treatment with topographical patterning of microelectrode surfaces. She says she expects the approach to "additively improve the quality and stability of neural recordings" obtained by the electrodes.