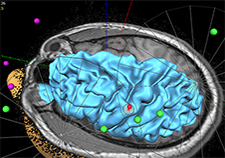 The results appeared online Nov. 10, 2015, in the journal Neuromodulation.

In transcranial magnetic stimulation, or TMS, clinicians take an electromagnetic coil—essentially a wire wrapped around a solid core—charge it with electricity, and apply it to specific points on the skull. The result is a targeted magnetic field that can affect brain cells in a specific area.

The treatment is FDA-approved for major depression that doesn't respond to other treatments. Over the past few years, researchers have been studying it for an array of other conditions involving the brain. A portable device that uses TMS was approved by the FDA in 2013 to treat certain types of migraines. But to date, only limited research has looked at the potential of TMS for treating other types of headaches.

Half were randomized to a real TMS treatment, while the others received a sham version that looked and felt like the real thing.

Lead researcher Dr. Albert Leung and his team used MRI to pinpoint treatment with the magnetic coil on a precise area of the brain: the left motor cortex. Past research has shown this area may be involved in headache pain.

The MRI images were fed into special software that enabled the team to visualize the magnetic field and the participant's brain in real time and focus the energy as a cone-shaped beam into the target region. This helped ensure that the same exact brain area was targeted in exactly the same manner in each individual volunteer, across all treatment sessions.

The Veterans received three real or sham treatments within a week. In assessments one week later, about 58 percent of the real-treatment group showed at least a 50-percent reduction in headache intensity, versus only 17 percent in the sham group. In assessments after four weeks, the real-treatment group continued to show greater improvements than the sham group.

The authors concluded that the protocol "appears to be a clinically feasible and effective treatment option." They plan further tests of the treatment, along with imaging studies to better understand exactly how it works.