ORD Home » Currents  » What good can come of trauma?

What good can come of trauma? 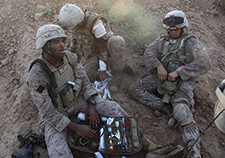 Navy corpsmen tend to a Marine wounded in a firefight in Afghanistan in 2009. VA researchers are studying the after-effects of trauma—not only the negative ones, but the "posttraumatic growth" that often occurs as well. (Photo by Cpl. Artur Shvartsberg/USMC)

Navy corpsmen tend to a Marine wounded in a firefight in Afghanistan in 2009. VA researchers are studying the after-effects of trauma—not only the negative ones, but the "posttraumatic growth" that often occurs as well. (Photo by Cpl. Artur Shvartsberg/USMC)

"Posttraumatic growth" may not be a household term like posttraumatic stress disorder. But thanks in part to recent VA studies, the idea is becoming more familiar—both in the research world and among Veterans who have been through traumas.

"It's the general idea that after a trauma, not everything that happens to someone is necessarily bad," explains Dr. Jessica Keith, a psychologist who works with trauma survivors at the Bay Pines (Fla.) VA Healthcare System.

The literature on posttraumatic growth dates back to seminal work by University of North Carolina authors Drs. Lawrence Calhoun and Richard Tedeschi in the 1990s. They define it, in a nutshell, as positive psychological changes that result from struggling with traumatic events. 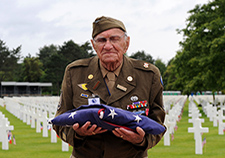 When growth happens later in life

How common is posttraumatic growth?

Those changes could bring a greater appreciation of life, more self-esteem and connectedness to others, a renewed sense of meaning and purpose. Psychologists believe such growth can counter and in some cases overcome the lingering negative impacts of traumas such as combat or sexual abuse.

What might seem like two opposing forces in the wake of crisis—positive changes, versus distressing symptoms—are not really opposing after all. They can and often do occur at the same time. And they can work hand in hand.

"A lot of people think of posttraumatic growth as something that develops later on, after the PTSD symptoms have subsided," says psychologist Dr. Jack Tsai, with Yale and VA's New England Mental Illness Research, Education, and Clinical Center, whose group has conducted long-term studies of trauma survivors. "But we've found that a lot of times there's this weird juxtaposition, in which people are experiencing the negative effects of trauma, but at the same time reporting some positive effects."

That's an important point to drive home to Veterans, says Tsai. "The approach is not, 'Hey, suck it up and get over it and then you'll be able to grow from it.' Rather, in many cases they are expressing a lot of pain at the same time."

Keith agrees. A recent study by her group, led by Dr. Alaa Hajizi, then a postdoctoral fellow at the Bay Pines VA, included 167 combat Veterans from different eras. "We looked at people pre-treatment, and we found that some of them had levels of posttraumatic growth that were quite high, even though they'd yet to have any treatment and they had significant symptoms."

Keep in mind that those who go through bad events and remain fully intact psychologically may not be considered to have experienced posttraumatic growth at all. By definition, it involves going through some mental struggles, perhaps intense at times—and emerging stronger for the ordeal.

"If someone is not affected by their trauma at all, they're not going to have much posttraumatic growth," says Tsai.

The role of treatment

Some researchers see posttraumatic growth as a form of emotional resilience. Others, like Keith, have a different take.

"Resilience means you went through a potentially traumatic event, such as combat, and you weren't affected," she says. "You didn't really experience emotional or mental health problems afterward. With posttraumatic growth, in general, you experienced some very difficult moments after the trauma, maybe some PTSD symptoms or full PTSD, and then in the working-through process, the healing process, you grappled with it and eventually got to the point where you experienced some growth."

For some Veterans, posttraumatic growth takes shape only after months or even years of treatment. But treatment is by no means a pre-requisite. In fact, some treatments, like sedating drugs, may thwart growth—even if the drugs are needed for a time to quell troubling symptoms and enable the person to function.

Keith: "We know some medications, like benzodiazepines, can interfere with PTSD psychotherapy, because you can't feel your emotions enough to actually work through them. So they could possibly interfere with posttraumatic growth as well, if they numb you so you don't need to grapple and struggle."

On the other hand, treatment, especially psychotherapy, can often spur growth. In fact, Keith believes that generally, "we're increasing posttraumatic growth by the end of treatment, to some degree, although there are still levels of it pre-treatment."

The main goal of talk therapy is a reduction in symptoms, but posttraumatic growth could be a positive byproduct. Keith cites cognitive processing therapy as a prime example. "This therapy, in particular, looks at how people see themselves, and how they see others and the world around them. It is specifically trying to form a new belief system."

Keith, who specializes in working with women who've experienced military sexual trauma, tells of Veterans who would write, before their sessions began, about not being able to trust anyone. "Then if they process their trauma and look at their thoughts, they can come out the other side and realize that 'in this trauma there were some people who had my back, who I trusted a lot. And there are some people I can trust now.' So they get these more nuanced views, and there can be some growth through that. It's not an explicit goal of treatment, but I think it could be made more explicit."

The evolution in thinking that Keith describes is a result of cognitive flexibility, which has emerged in research as one of the traits that predict posttraumatic growth.

Can someone learn to be more cognitively flexible, or is it something you're born with? Keith says it's both. She acknowledges that some people will come into therapy with more of this trait, and perhaps treatment will be smoother for them because of it. But at the same time, "it can be learned to some degree. In fact, a lot of the psychotherapies being used for PTSD do speak to cognitive flexibility." Again, she cites cognitive processing therapy in particular: "It's all about helping people challenge their unhelpful thinking, seeing things in more shades of gray. That's part of these treatments, and we know they work."

The balance between PTSD and growth

Tsai's group, which has analyzed data on thousands of Veterans from the National Health and Resilience in Veterans Study, describes the statistical relationship between PTSD and posttraumatic growth as "curvilinear." Picture an upside-down U shape. There's a mid-range of PTSD symptomatology that's conducive to growth. "But when it's just too much," says Tsai, "and the symptoms are too debilitating, it's hard to develop posttraumatic growth from that."

In the title of one of their reports on the findings, Tsai's team used the phrase "what doesn't kill you makes you stronger," based on the old adage, but also playing off the lyric from the 2011 hit "Stronger" by singer-songwriter Kelly Clarkson.

But Tsai himself is quick to point out that for some trauma survivors, this is not the case. Not everyone ultimately benefits from trauma.

Keith says she would amend the catch-phrase: "What doesn't kill you could make you stronger."

Another growth predictor that emerged in the study by Keith's group was a sense of moral wrong-doing—having hurt others, having gone against one's own moral principles. Psychologists call this "moral injury."

Keith says: "This might be because the trauma caused more pain, and they had to grapple with it more. They were forced to work at making some meaning out of it, and as a result they experienced growth."

Tsai's research has identified other factors that appear to be associated with posttraumatic growth, although it's hard to tease out whether they are pre-existing traits that spur growth, or the products of it. They include qualities like altruism, religiosity, a sense of purpose in life, and an "active reading lifestyle," in which the person seeks out new knowledge and enlightenment.

"It seems a lot of these factors relate to people doing things outside themselves, whether it's worshiping or volunteering or connecting with others in other ways," reflects Tsai. "Being involved with the greater world seems to bring on growth. When you give you receive."

Whatever the drivers of posttraumatic growth, both Keith and Tsai say it's good news that the topic is increasingly on researchers' radar.

"It's great it's being studied at all, so people know it exists," says Keith. "We need to challenge the old-school way of thinking that trauma is linked only to bad things. We cannot assume the person will have growth, but we know they can. Even with the very difficult aspects of trauma, it's often talking about them, feeling them, being devastated by them for a while, that can lead to growth."

How common is posttraumatic growth?

In a study by Dr. Jack Tsai's group, based on survey results from a nationally representative sample of more than 3,000 Veterans, 50 percent of all Veterans reported "moderate" posttraumatic growth. Among those who screened positive for PTSD, 72 percent reported moderate posttraumatic growth.

The researchers concluded: "[Posttraumatic growth] is prevalent among U.S. Veterans, particularly among those who screen positive for PTSD. These results suggest that there may be a 'positive legacy' of trauma that has functional significance for Veterans."