Helping those with vision loss find their way 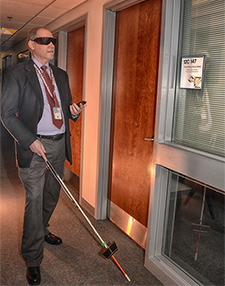 Thanks to technology, blind people and those with low vision are now able to find their way around independently with greater ease. VA has been a leader in the field historically, and today, several wayfinding projects are in the works at the Center for Visual and Neurocognitive Rehabilitation, based at the Atlanta VA Medical Center. Here's an overview: