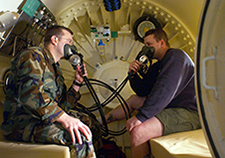 The results are in from the latest joint Department of Defense and VA study on hyperbaric oxygen therapy for treating damage caused by concussions, and much like the earlier trials, the results aren't promising. The study was published in JAMA Internal Medicine in January 2015.

Hyperbaric oxygen therapy involves exposing patients to pure oxygen inside a pressurized chamber. There is evidence for the treatment's medical benefits for a range of injuries, and many in the medical and Veteran community hoped it would provide an effective, drug-free alternative to treating the post-concussion symptoms that are common in mild traumatic brain injury.

"Whenever you pressurize a gas, the body absorbs more of it," says COL. Scott Miller, an infectious disease specialist at the U.S. Army Medical Materiel Development Activity at Fort Detrick, Md. "Essentially you can get higher amounts of oxygen into the body, so you can think of [the oxygen] as a drug that way."

Unlike other drug treatments, however, hyperbaric oxygen poses little risk to patients. As a result, VA and DoD have conducted several research studies over the past few years on the effectiveness of the therapy at treating brain injuries.

'No evidence for any therapeutic benefit'

"To date, there have been nine peer-reviewed publications describing this research," Dr. David Cifu, VA's national director for physical medicine and rehabilitation recently told the Oklahoman. "All the research consistently supports that there is no evidence that hyperbaric oxygen has any therapeutic benefit for symptoms resulting from either mild TBI or PTSD."

The most recent study, led by Miller, was funded by the Defense Health Program and sponsored by the Army office of the Surgeon General. Two VA neuropsychologists, Dr. Lisa Brenner and Dr. Nazanin Bahraini, participated as investigators.

The study involved 72 active-duty military members with a recent history of concussion and persistent post-concussion symptoms.

"Symptoms were very typical for our military population—a combination of headaches, lack of concentration, difficulty focusing. All of these are also typical symptoms of PTSD, which is to be expected, as about two-thirds of the participants also had some level of PTSD," says Miller.

The participants, who were recruited through TBI clinics and unit medical officers, were divided into three groups. The Intervention group received 40 one-hour sessions of 100-percent oxygen at 1.5 times normal pressure over a 10-week period.

The second group received a sham procedure. They had the same number of sessions in the chamber, except they received normal air at 1.2 times sea level air pressure. "It's enough to make the ears pop and pressurize the sinuses," says Miller," and oxygen is odorless, so there is no way the participant could know whether or not they were truly receiving the therapy."

After 10 weeks, the participants, all of whom had served in either Iraq or Afghanistan, were assessed via symptom questionnaires and standardized testing. Interestingly enough, both the intervention and sham group showed mild improvement. "There wasn't really a difference between the sham and the intervention groups, statistically speaking," says Miller.

The improvement, Miller believes, is due less to the pressurized chamber, and more to the experience of participating in a research trial.

"It's probably a placebo effect just from participating," he says. "These participants met with research teams and hyperbaric technicians for several hours per day. It was a fairly intense interaction."

In other words, participants did show improvement, but not because of the therapy but as a result of some other, yet unmeasured variable. While this may prove unsatisfactory to proponents of the therapy, it does perhaps help explain some of the anecdotal results reported previously.

As for hyperbaric oxygen therapy, the nail may not be in the coffin yet, but Miller isn't optimistic.

"People did get better and we can't ignore those results," he says. "The DoD and VA research team do have an ongoing study which will be completed in 2016. But based on what we know, I don't see any benefit to putting [hyperbaric oxygen therapy] forward for additional studies. We've made data available to both VA and Tricare with the recommendation that reimbursement for this therapy not be made at this time, due to lack of evidence."