Exploring the link between trauma and disordered eating for female Vets 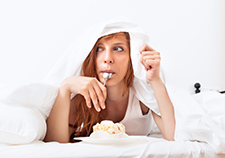 Disordered eating can encompass a wide range of abnormal and unhealthy eating behaviors, but does not include eating disorders such as anorexia or bulimia. (Photo for illustrative purposes only. ©iStock/JackF)

Disordered eating can encompass a wide range of abnormal and unhealthy eating behaviors, but does not include eating disorders such as anorexia or bulimia. (Photo for illustrative purposes only. ©iStock/JackF)


The terms "eating disorders" and "disordered eating" are often confused with one another, but they hold subtle differences. The former relates to serious conditions such as anorexia, an obsessive desire to lose weight by refusing to eat; bulimia, when excess overeating is often followed by self-induced vomiting, purging, or fasting; and binge eating, which includes overeating without purging or other compensatory behaviors.

Disordered eating, a wide range of abnormal eating behaviors, may be linked to eating disorders but doesn't meet the criteria for an eating disorder diagnosis. It's much less talked about but far more common.

Now, a new VA-funded study involving a small group of female Veterans says military trauma that is related to such conditions as depression and PTSD can trigger disordered eating.

The study, published online in January 2017 in Women & Health, found that trauma was associated with disordered eating, often in relation to negative feelings and emotions and thoughts of panic, fear, and anxiety. The research also says disordered eating generally provides short-term but not long-term relief from negative feelings or emotions related to trauma, as well as a way to avoid unwanted attention from potential and past perpetrators of trauma.

"We're overeating because we had trauma and we're angry."

The researchers defined disordered eating as changing eating patterns in response to stress, using food to cope with stress, gaining or losing more weight than desired, or starting to become very interested in healthier eating in an excessive or otherwise unusual or harmful way.

Examples of disordered eating include eating unbalanced meals where one intentionally avoids "fatty" foods or carbohydrates; skipping meals to either fast or to eat other foods, such as ice cream, in excess; or using a laxative to help release food from the body.

Trapped in a 'vicious cycle'

Study co-author Dr. Jessica Breland, an investigator with the Center for Innovation to Implementation at the VA Palo Alto (California) Health Care System, says although much research exists on the link between trauma and disordered eating, "we wanted to interview women Veterans to hear, in their own words, why that relationship might exist. We think understanding this issue from a Veteran perspective will help clinicians better understand how to help the Veterans they serve."

The women answered questions about changes in their eating habits that might be related to traumatic or stressful experiences. One question asked: "Some Veterans...say they eat when they experience stress or think of things that are just hard to deal with. Has this ever happened to you?"

The participants reported high rates of trauma exposure and disordered eating. Each of the 20 women noted exposure to a potentially traumatic event in the military such as a personal injury, and 17 said they experienced military sexual trauma. The study suggested that many women experienced multiple traumas. Some described the types of trauma they experienced, while others spoke broadly about trauma without offering details. Sixty-five percent of the participants reported psychological symptoms, namely depression and/or PTSD.

The participants averaged 48 years old and 15 years of military experience. Most were of relatively low income, and 11 were women of color.

The researchers identified three themes that related to trauma exposure and disordered eating:

According to Breland, some women began their disordered eating patterns while in the military. Others said their problems started after they left the service.

Clinicians must be aware of treatment options

In analyzing the answers, the researchers looked for signs of anorexia, bulimia, and other eating disorders. Fourteen women had possible eating disorders based on the SCOFF, a five-question screening tool designed to help determine whether an eating disorder may exist, rather than to make a diagnosis. (i.e., "Do you believe yourself to be fat when others say you are too thin?) Five participants reported purging, and 15 reported being worried about losing control over their eating.

The results of the study, Breland says, suggest disordered eating is both a major problem that stands alone and a marker of other issues that may need attention.

"For some women, disordered eating is related to other problems," she says. "For example, the stress of leaving structured military environments or the difficulty of coping with past trauma. We think it's important for clinicians to ask questions when Veterans describe disordered eating so they can figure out which is the case."

She says the results of the study suggest that Veterans may benefit from different kinds of treatment depending on the cause of their eating disorder.

"For example, they might benefit from cognitive behavioral therapy for eating disorders," she says. "Or if PTSD is driving the eating disorder, psychological treatment for PTSD may help treat their eating problems. If the eating problems are mainly driven by depression, then therapy, medication, and/or physical activity could help. That said, a lot more research needs to be conducted before we'll know for sure."

What about male Veterans and active-duty service members? Are they also at risk for trauma exposure and disordered eating, or is it mostly a problem for women?

"In this study, we focused on women Veterans because they are at increased risk for problems with eating, compared to men Veterans," Breland says. "But we think that studying the relationship between trauma and disordered eating among men is a really important next step."