ORD Home » Currents  » On the frontlines of diabetes prevention

On the frontlines of diabetes prevention 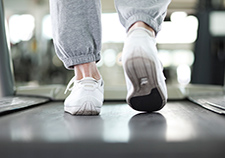 Veterans in the Diabetes Prevention Program aimed for 150 minutes per week of walking or other moderate exercise. (Photo: ©iStock/hoozone)

Veterans in the Diabetes Prevention Program aimed for 150 minutes per week of walking or other moderate exercise. (Photo: ©iStock/hoozone)


During your annual physical, a doctor tells you that you're 25 pounds overweight, with an abnormally elevated blood sugar level.

Studies have shown weight loss to be a key predictor of diabetes risk reduction, so your first step may be to shed some pounds.

With that in mind, VA researchers enrolled 387 overweight or obese Veterans with prediabetes in a pilot study that compared the efficacy of two VA programs: the Veterans Affairs Diabetes Prevention Program (DPP), in which weight loss is a major element, and MOVE!, VA's flagship weight-management program for overweight or obese patients. Both programs are supported by VA's National Center for Health Promotion and Disease Prevention in Durham, North Carolina.

"I think we can do more to increase awareness and knowledge about prediabetes. Maybe that would help motivate people to do something about their health in general."

The study, published online in January 2017 in the American Journal of Preventive Medicine, found that DPP resulted in a much greater loss of pounds than MOVE! at the six-month mark: 9.0 versus 4.2. The margin was smaller after 12 months, with DPP participants weighing 7.5 pounds less than when the program began and MOVE! Veterans 4.4 pounds less.

Lead author Dr. Tannaz Moin, an endocrinologist at the VA Greater Los Angeles Healthcare System, attributes the difference at six months mainly to the greater number of group sessions the DPP participants could attend. They were offered 16 core sessions in that period, many of them on a weekly basis, compared with 8 to 10 for MOVE! Veterans. She says the DPP participants regained some weight in the last six months because they met for only six monthly maintenance sessions.

"We noticed that having more sessions correlates with weight loss," Moin says.

Moin also suggested the DPP sessions may have held an advantage because they involved closed groups with the same Veterans and coaches, leading to greater intensity and cohesion in the meetings. Different coaches and Veterans took part in each MOVE! session.

The curriculum in both groups focused on healthy lifestyle changes. There was no physical activity during the sessions, but each group recommended exercise outside of class. All DPP participants aimed for 150 minutes of moderate exercise each week—for example, walking—and a 7-percent weight loss. In contrast, MOVE! participants assigned their own goals.

As Moin sees it, the difference in weight loss at six months points to DPP as a more effective program than MOVE! for that time period.

"The statistically significant difference in weight loss is one way we can define that," she says. "But another way we might define that is around patient satisfaction. Veterans who participated in the DPP program were more satisfied with the intervention. We asked both groups to talk to us about their relationships with peers and coaches. Pretty consistently, the DPP participants gave higher ratings across the board."

In 2012, VA implemented a pilot version of the Diabetes Prevention Program in hopes of reducing the number of Veterans who develop diabetes.

Diabetes, a chronic disease in which the body cannot produce or properly use insulin, affects nearly 25 percent of the VA population. Insulin normally brings sugar out of the bloodstream and into cells, but if the body cannot make insulin or fails to respond to it, the sugar remains in place. High blood sugar levels can damage blood vessels and organs.

Diabetes is the No. 1 cause of blindness, kidney disease, and amputation for VA patients.

The pilot study included Veterans from VA medical centers in Minneapolis, Baltimore, and Los Angeles. Nearly 80 percent of VA patients are overweight or obese, so to reflect that, the researchers focused on overweight or obese patients with prediabetes. Participants were mostly men (89 percent) with an average age of 58. Of the 387 Veterans who enrolled, 273 were in the DPP program and 114 in MOVE!

Not surprisingly, participation rates in DPP were higher than in MOVE! More DPP participants completed one or more sessions, at least four sessions, or eight or more sessions. Among the two groups, there were no major differences at 12 months in VA health expenditures, or costs for patients outside the program that were related to health care.

Neither of the two groups showed significant reductions in hemoglobin A1c, a measure of blood sugar that can determine whether a person has diabetes or prediabetes, but Moin says that was not surprising:

"From a clinical perspective, weight loss is not always associated with change in A1c," she explains. "This is probably the most important point to note. However, even without the change in A1c, we know that the weight loss has beneficial effects on diabetes risk reduction."

Based on the six-month test results, Moin and her team reasoned that features of DPP such as its closed groups and increased number of sessions may help MOVE! reach a larger segment of the VA population and better promote weight loss. MOVE!, which has led to many weight-loss success stories since it was launched in 2006, is in place at more than 150 VA health centers and community-based outpatient facilities around the country.

Results from the DPP trial prompted the National Center for Health Promotion and Disease Prevention (NCP) to make national recommendations to improve MOVE! Those recommendations included using the same coach for each MOVE! session and implementing more closed sessions to improve group cohesion, says Dr. Susan Raffa, NCP's national program director for weight management. She says the DPP demonstration also partly influenced an increase in group MOVE! sessions per year to 16. According to Moin, the increase in MOVE! sessions translates to nearly twice as many at the three VA sites in the DPP study—Baltimore, Minneapolis, and Los Angeles.

"Those are huge steps toward making MOVE! sort of closer to a DPP-like program," Moin says. "The MOVE! program went through and is still going through a national redesign. With everything that MOVE! does and is doing in terms of the redesign, we have one of the best examples nationally of how to provide weight-loss intervention to Veterans who have prediabetes and other risk factors."

Nevertheless, Moin says VA and the private medical community must do a better job of raising prediabetes awareness. The U.S. Centers for Disease Control and Prevention estimates that 1 in 3 American adults, or 86 million people, have prediabetes. Of those 86 million people, 9 in 10 don't even know they have it. Without intervention, 15 percent to 30 percent of people with prediabetes will develop type 2 diabetes within five years, the CDC says.

One of the first steps to addressing the problem, figuring out if someone even has prediabetes, is "tricky," Moin says.

"There are no definitive signs," she says. "Patients with prediabetes typically have no symptoms whatsoever. Basically, patients with risk factors are those who are overweight or may have hypertension."

But she's quick to note that not everybody with prediabetes gets diabetes.

"Providers might talk to patients about it and say, 'You're a little overweight, you should lose weight,' " she says. "But I think we can do more to increase awareness and knowledge about prediabetes. Maybe that would help motivate people to do something about their health in general."