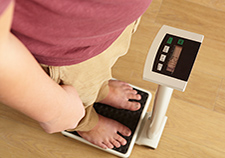 Researchers at the Atlanta VA analyzed 176 million weight observations—that is, scale readings during clinic visits—obtained from 4.7 million male and female Veterans between 2000 and 2014. (Photo: ©iStock/Cathy Yeulet)

Researchers at the Atlanta VA analyzed 176 million weight observations—that is, scale readings during clinic visits—obtained from 4.7 million male and female Veterans between 2000 and 2014. (Photo: ©iStock/Cathy Yeulet)

Two studies by investigators at the Atlanta VA Medical Center were in the spotlight at the American Diabetes Association (ADA) 76th Annual Scientific Sessions, held earlier this month in New Orleans. Both studies were publicized by the ADA media team.

One study looked at weight trends among Veterans. Excess weight is a leading risk factor for type 2 diabetes. As of today, diabetes affects nearly 1 in 4 Veterans in the VA health system.

The other study by Atlanta investigators looked at a new combination approach to checking blood sugar, as a way to reliably identify those at risk for diabetes.

First epidemiologic look at weight among Veterans since 1970

The study on weight found that toda's Veterans are heavier and are gaining weight more rapidly than their counterparts a generation ago. The authors say the trend has worrying implications for the incidence and prevalence of diabetes and other chronic diseases among VA patients.

The study found that toda's Veterans are heavier and are gaining weight more rapidly than their counterparts a generation ago.

Several national surveys have shown increases in obesity and diabetes across the U.S. But there's been only limited research focused specifically on Veterans.

Research associate Margery Tamas and colleagues analyzed 176 million weight observations—that is, scale readings during clinic visits—obtained from 4.7 million male and female Veterans with and without diabetes. The data were from the National VA Clinical Data Warehouse.

Regardless of diabetes status, the average weight among patients on the whole increased by about 22 pounds between 2000 and 2014.

According to Tamas, the study was the first epidemiological study of weight trends in a Veteran population since 1970.

"Today's Veterans [on average] weigh about 10 kg more than the Veterans of 40 years ago at the same ages, and younger Veterans are gaining weight more rapidly than in the previous study," she said. 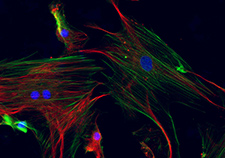 She said, given the trend, that diabetes rates are likely to climb even higher among older Veterans and might emerge as "a major health problem among younger Veterans."

The other study chosen for a news release by the ADA concerned glucose testing to identify Veterans at high risk for diabetes.

A team including VA staff physician Dr. Mary Rhee found that combining the results of two simple glucose tests, neither of which requires fasting, reliably predicted new cases of diabetes within a three-year window.

Hemoglobin A1c, a measure of average blood sugar levels over the past two to three months, is commonly used to assess diabetes risk and status. One advantage is that it does not require fasting the night before. But used alone, it is not always a reliable predictor for the development of the disease, according to some past research.

But other tests, such as fasting plasma glucose (FPG) and oral glucose tolerance testing (OGTT), require an overnight fast. This requires advance coordination and also limits the time of the day at which the tests can be done.

As an alternative, the researchers looked to a non-fasting one-hour glucose challenge test (GCT). Patients drink a glucose beverage and then have their blood drawn an hour later for testing. The test has been commonly used at doctors' offices—but mainly to screen for gestational diabetes among pregnant women.

The researchers set out to compare the results from all three approaches: A1c, the combination of the two fasting tests, the FPG and the OGTT; and the GCT. The three-year study included more than 1,000 Veterans, all of whom had all three measures done.

The study found that the A1c test combined with either FPG; one- or two-hour OGTT; or the GCT was a stronger predictor of diabetes onset than any single test alone. The researchers identified the specific values for each test that, as part of the combination approach, signaled diabetes risk.

Overall, the combination approach had a specificity of 90 percent, meaning 9 in 10 patients identified as high-risk went on to develop diabetes during the three-year study period.

Rhee, who is also an associate professor at Emory University, said different combinations of tests might be advantageous in different clinical situations.

She emphasized the urgency of preventing the onset of diabetes in high-risk Veterans, and said the new combination approach may help target those most likely to benefit from intervention.

Senior author on both studies was Dr. Lawrence Phillips, medical director of the Clinical Studies Center at the Atlanta VA and a faculty member of Emory Universit's Global Diabetes Research Center.

Adapted from materials provided by the American Diabetes Association.