Stefan has been involved in tech transfer for many years and has supported government tech transfer, led the tech transfer programs for the Wright Brothers Institute and the Edison Materials Technology Center, and participated in a variety of economic development efforts in Ohio.

Stefan earned undergraduate degrees in Chemical Engineering, Chemistry, and German from Virginia Tech, and an MBA from Wright State University. He enjoys tennis, sailing, skiing, home renovations, outdoor activities, and is an active member of the Oakwood Rotary Club.

Jenish received his Bachelors of Science degree in Biological Sciences from the University of Tennessee, Knoxville, where he also conducted undergraduate laboratory research in immunology. Then, Jenish was a post-baccalaureate research fellow for the Association of Public Health Laboratories at the Centers for Disease Control and Prevention for two years conducting laboratory research on pandemic influenza viruses. Jenish has a PhD from the Icahn School of Medicine at Mount Sinai, New York in Microbiology with a research focus on immunology and infectious diseases, where he also conducted his post-doctoral research in innate immunity to pathogens. Jenish has authored over 25 publications throughout his academic research career.

Jenish was born and brought up in India and moved to the United States during high school. He has interests in music and dancing and is a dance instructor for Indian classical dance.

Jenish looks forward to contributing to the great work that the VA does for the Veterans and the public and hopes that the diversity, expertise, knowledge and skills he brings will serve the mission of the TTP and VA well. 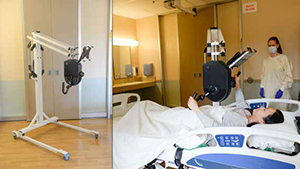 An upper-limb exercise device invented by VA researchers will soon become available to patients and health care systems. The Multi-Purpose Arm Cycle Ergometer for Rehabilitation (M-PACE) allows patients with conditions such as spinal cord injury to participate in a wider range of exercise and rehab activities. Action Manufacturing Inc. and VA have reached an exclusive patent license agreement on the device. The M-PACE was created by researchers at VA’s Minneapolis Adaptive Design and Engineering Program. Prolonged bed rest due to medical treatments or conditions can lead to muscle loss and other problems. With the M-PACE, patients can exercise while lying in bed. It can also be used from a wheelchair or while standing. The device features pedals that can be used with the arms, along with several other configurations. “The M-PACE’s ability to deploy over a bed is particularly important,” explained Dr. Gary Goldish, one of the inventors, to TechLink, “because prolonged bedrest without exercise can lead to rapid deconditioning and can negatively affect many systems of the human body, including the central nervous system, digestive system, and endocrine system.” 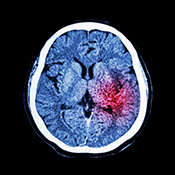 A new drug developed by VA and international partners could reduce deadly brain damage from stroke. The drug, ZT-1a, has proved effective at reducing brain swelling after stroke in animal models. It targets a pathway in the brain that controls how ions and water move in and out of brain cells. After stroke, malfunctioning proteins can allow too much water into the brain and cause dangerous swelling. ZT-1a stops these proteins from activating. Currently, invasive brain surgery is needed to alleviate this swelling. The drug was developed by an international consortium, including Dr. Dandan Sun of the VA Pittsburgh Health Care System. The consortium was made up of inventors from Xiamen University in China, Exeter University in the United Kingdom, and the VA and University of Pittsburgh. VA has filed a patent for the drug’s use as a stroke treatment. 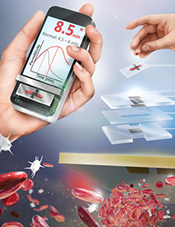 An experimental portable blood-clotting sensor called ClotChip, co-owned by VA and Case Western Reserve University and licensed to the private company XaTek, now has FDA “Breakthrough Device” status. The designation speeds the development of technologies that outperform current products in treating or diagnosing serious conditions. Investigators with VA’s Advanced Platform Technology Center and CWRU developed and tested the technology. It can assess a patient’s clotting ability—based on a single drop of blood—in about 15 minutes, compared with a day or longer for existing methods. “ClotChip is designed to minimize the time and effort for blood-sample preparation. [It can] be used at the doctor’s office or other points of care for patients on anticoagulation therapy [or] antiplatelet therapy, or who have suffered a traumatic injury causing bleeding,” said Dr. Pedram Mohseni in a 2016 CWRU article.

VA and the University of Maryland are joint owners of a newly issued patent (US 10,537,609 B2) for a peptide-based treatment for Pseudomonas aeruginosa infections. P. aeruginosa can cause infections in the blood, lungs, or other parts of the body after surgery. At highest risk are hospital patients on breathing machines, those with catheters, and those with wounds from surgery or burns. The new potential treatment has been tested successfully in mice and is pending further study. The approach is promising because it uses a specific peptide, or a piece of a protein, to defeat the bacteria and does not rely on antibiotics. P. aeruginosa is increasingly resistant to antibiotics. In 2017, multidrug-resistant P. aeruginosa caused an estimated 32,6000 infections and 2,700 deaths in the U.S. Visit VA’s partner TechLink to read more about this and other available technologies based on VA inventions and discoveries.